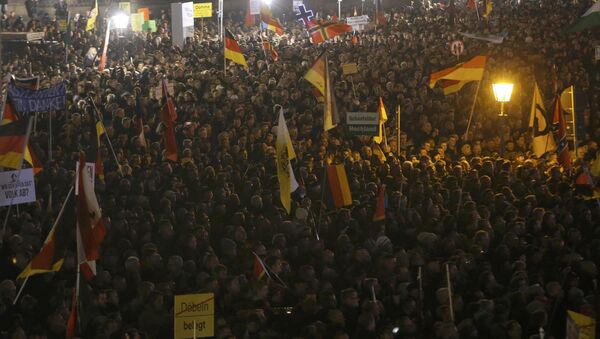 © REUTERS / Fabrizio Bensch
Subscribe
Representatives of Europe's anti-Islamization movement are preparing to meet in Prague on Saturday to plan a pan-European demonstration, and decide on a united response to the New Year's assaults in Cologne.

Germany's Pegida and other allied movements have stated that they will conduct a grand assembly in Prague, where representatives of the movement from groups across the continent will meet.

The chairman of the Czech parliamentary faction Usvit, Marek Cernoch, told Sputnik Czech Republic that the meeting will be held to discuss the details of a —pan-European demonstration. The group will also decide on what steps must be taken to prevent incidents like the mass sexual assaults in Cologne from repeating elsewhere in Germany.

"We will demand the strictest measures against migrants, we want to defend our women and children, all Europeans from them!" Cernoch told Sputnik.

Right-Wing German Gangs Pledge to Fight 'Sex Jihad'
Cernoch also outlined the movement's discontent with the way issues such as the Cologne sexual attacks are treated by European Union politicians and media.

"What do we see? Recently, Brussels' diplomatic head Morgherini visited Prague. And we heard, that the mass violence in Cologne was not an emergency, 'things like that happen all the time' <…> German and European media in fact belittle the tragedy of actions committed by visiting vandals," Cernoch told Sputnik.

Cernoch also criticized the EU's pressure against the Czech Republic for rejecting its quota system.

"The Czech Republic has been criticized for refusing a strange system of mandatory quotas. And why, [when] we are a sovereign state, must we obey the will of the large EU countries? In short, while there is no single law for all, the chaos will continue. Pegida [is for its] strong termination. Otherwise, we will drown in millions of refugees carrying terror, radical Islam and a culture alien to Europeans," Cernoch told Sputnik.

Responding to accusations that Pegida supporters incite religious strife, Cernoch said that he cares more about whether a person is a good neighbor, than what their skin color is. Cernoch added that in the Czech Republic, around 90 percent of the population fears the migrant influx, and that he believes that figures are similar across the EU.