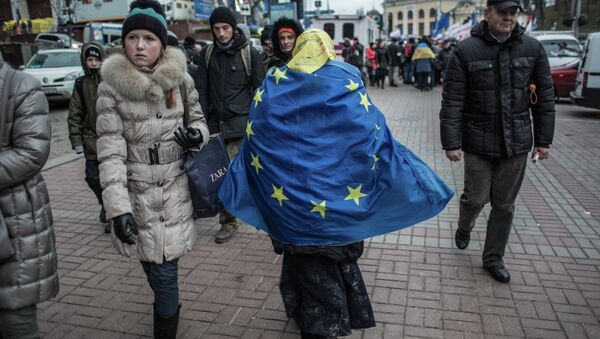 Bogdan Bezpalko, the deputy director of the Center for Ukrainian and Belarussian Studies at Moscow State University, said that Europe is much more eager to accept refugees from the Middle East and Africa than from Ukraine.

"Europe needs Ukraine only for its resources and as a market – it needs a semi-colonial state and doesn’t care about the people who live there," he said. "It becomes clear when you see how Germans treat the refugees from Africa and the Middle East, even though there’s no civil war in some of those countries, unlike Ukraine. This is a fine example of how Europeans really feel about Ukrainians; it shatters all illusions about Europeans treating Ukrainians as equals."

Bezpalko also claimed that many Europeans have rather hostile feelings towards the citizens of post-Soviet states like Ukraine.

"It is a European phenomenon. For example, in France people from the former Soviet republics were treated with hostility, while Africans and Arabs who came from the former French colonies, were always treated much better due to some sort of guilt complex perhaps. Same deal with Germany," Bezpalko said.

He also added that the current measures implemented by the EU to stem the tide of refugees are unlikely to succeed.

"They need more decisive measures. They need to establish tight border control along the outer borders of the EU, they need to protect all of the European Union’s territory from the flow of refugees," Bezpalko insisted.

Earlier, the German newspaper Frankfurter Rundschau reported that German authorities may deport thousands of Ukrainian asylum seekers in the immediate future if Berlin recognizes Ukraine as a "safe country of origin." The newspaper recalled that earlier, more than 7,000 Ukrainians had applied for asylum in Germany due to the armed conflict in eastern Ukraine.