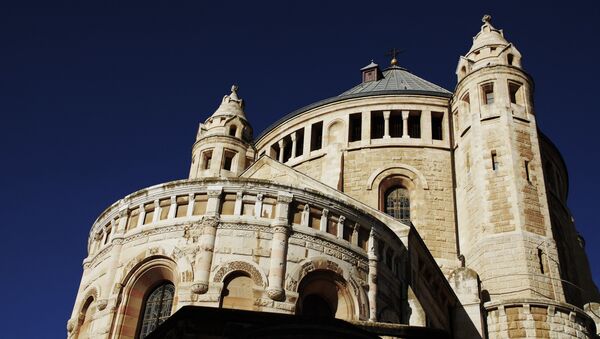 Graffiti slogans in Hebrew at the Dormition Abbey read ‘Death to the heathen Christians, the enemies of Israel,’ among other slanderous writings marking the ancient structures.

Police suspect Israeli right-wing religious extremists as being behind the anti-Christian vandalism, Associated Press reported over the weekend.

On the doors and walls of the Benedictine monastery, where, according to Christian tradition, the Virgin Mary died, words degrading Jesus were seen, while other slogans suggested that Christians ‘go to hell.’

Act of Hate Against Christians in Israel: Crosses Toppled at Cemetery
​Jewish radicals have, over the decades since the founding of Israel, vandalized Christian and Muslim holy sites in the country and occupied territories.

The vandalism prompted a sharp reaction from Jewish State authorities.

“We will not allow anyone to undermine the coexistence between religions in Israel,” Gilad Erdan, Israel's Minister of Public Security, said, according to AP.

“We will show zero tolerance to whomever harms the democratic foundations of Israel and its freedom of religion and we will apprehend those who carried out this heinous act,” he said.

Prime Minister Benjamin Netanyahu condemned the action in a statement.

PM Netanyahu condemned the spraying of anti-Christian slogans on the walls of the Dormition Abbey: police is searching for those responsible

​The Dormition Abbey is a popular historic site for pilgrims and tourists. The church and the surrounding buildings have  been vandalized several times in the past.