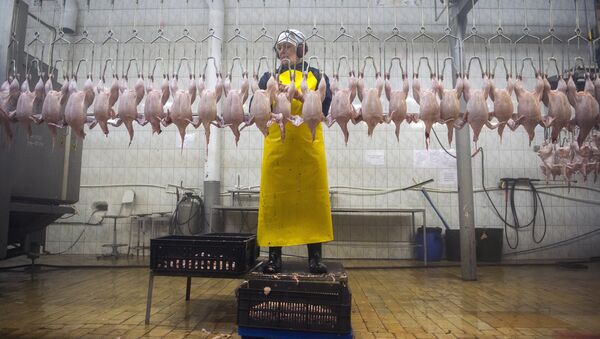 The European Union's free trade agreement with Ukraine turned out to be a "defrauding of Ukraine," according to Ukrainian President Petro Poroshenko's associate agriculture tycoon Yuriy Kosyuk.

In an interview to US government broadcaster Voice of America's Ukrainian service, Kosyuk said that the new free trade agreement will not help his company, as its import quota for chicken is a mere fraction of his company's production.

Nicknamed Ukraine's "chicken oligarch," Kosyuk controls nearly two thirds of Ukraine's chicken production and is an advisor to Poroshenko. Until December 2014, he was the deputy head of Poroshenko's administration.

"Europe talks of the Free Trade Area with Ukraine, and at the same time a load of exceptions and limitations are put on the export of Ukrainian goods. Because of this, the free trade area is only one-way, into Ukraine," Kosyuk told Voice of America.

Kosyuk also blamed the Netherlands' upcoming referendum on the Ukrainian association with the EU on a conspiracy of Dutch agricultural producers.

"I am convinced that the referendum Holland has made up regarding ratifying the EU's Association Agreement with Ukraine is one of the ways bywhich Dutch manufacturers, at least agricultural ones, are trying to shield themselves from Ukraine. And we know who is doing this"

Ukraine's membership in the Commonwealth of Independent States (CIS) free trade area, which covers much of the Soviet Union, was suspended after Ukraine joined the EU's free trade area on January 1, 2016.

Like many in Ukrainian business circles, Kosyuk initially favored the protests and coup which ousted Ukraine's former President Viktor Yanukovych over his break from the Association Agreement with the EU in 2013.

During protests in the lead-up to the coup, an infographic was circulated among activists, detailing trade with the EU, as an argument that the country's trade with the union can be an alternative to trade with Russia. The infographic showed Ukraine's exports to the EU in 2012, which appear to essentially mirror the quota policy.

Kiev Authorities Turning Ukraine Into Full-Fledged European Banana Republic
Kosyuk said that he was unable to succeed in the chicken business in Russia because as far as three years ago, Russia already produced more chicken than it consumed. The grain branch of his business divested from Russia in June 2015, exchanging its Russian holdings for land in Ukraine which then belonged to a Russian company.

The agricultural tycoon also said that he remains pessimistic about Ukraine's economic recovery.

"There will be no economic growth, it is a lie. I think that the economy will decline this year. We see the attitudes in business, why would there be growth? There are several economic drivers. The internal consumer, when consuming, can move the economy upwards. But the internal consumer is becoming poorer and has less and less money. The second driver is external markets, but they have remained the way they have been. The third driver is foreign investment. But foreign investment will not come to Ukraine in the short term," Kosyuk said.

19 January 2016, 18:08 GMT2
000000
Any news! ......with Ukraine as the chessboard for provocating Russia? The Slavic race of the East Europeans does not and will not be part of the European elite blood, so they simply are the most suitable for the western powers as a chessboard. Causalities? Well, use the NATO terminology: collateral damage.
ptcjm
19 January 2016, 18:16 GMT1
000000
Newsfeed
0
New firstOld first
loader
LIVE
Заголовок открываемого материала
Access to the chat has been blocked for violating the rules . You will be able to participate again through:∞. If you do not agree with the blocking, please use the feedback form
The discussion is closed. You can participate in the discussion within 24 hours after the publication of the article.
To participate in the discussion
log in or register
loader
Chats
Заголовок открываемого материала
Worldwide
InternationalEnglishEnglishMundoEspañolSpanish
Europe
DeutschlandDeutschGermanFranceFrançaisFrenchΕλλάδαΕλληνικάGreekItaliaItalianoItalianČeská republikaČeštinaCzechPolskaPolskiPolishСрбиjаСрпскиSerbianLatvijaLatviešuLatvianLietuvaLietuviųLithuanianMoldovaMoldoveneascăMoldavianБеларусьБеларускiBelarusian
Transcaucasia
ԱրմենիաՀայերենArmenianАҧсныАҧсышәалаAbkhazХуссар ИрыстонИронауОssetianსაქართველოქართულიGeorgianAzərbaycanАzərbaycancaAzerbaijani
Middle East
Sputnik عربيArabicArabicTürkiyeTürkçeTurkishSputnik ایرانPersianPersianSputnik افغانستانDariDari
Central Asia
ҚазақстанҚазақ тіліKazakhКыргызстанКыргызчаKyrgyzOʻzbekistonЎзбекчаUzbekТоҷикистонТоҷикӣTajik
East & Southeast Asia
Việt NamTiếng ViệtVietnamese日本日本語Japanese中国中文Chinese
South America
BrasilPortuguêsPortuguese
NewsfeedBreaking
02:54 GMTDemocrat’s Anti-Trump Playbook Could Be a Losing Strategy for 2022 Midterm Elections
01:44 GMTBiden White House to Reportedly Announce Diplomatic Boycott of Beijing Olympics
01:07 GMTGambia’s Incumbent Leader Wins Presidential Election - IEC
00:31 GMTOmicron Mitigation: What Travelers to the US Need to Know Beginning Monday
YesterdayFauci Speechless After US Senator Asserts Epidemiologist 'Overhyped' COVID-19 Pandemic
YesterdayFrench Presidential Candidate Zemmour Attacked at Villepinte Rally - Reports
YesterdayTrump Slams Top US General Milley as 'F**king Idiot' Over Afghanistan Withdrawal
YesterdayWWII Veteran And Longtime US Senator Bob Dole Dies at 98
YesterdayIran Blames US Stubbornness on Sanctions for Breakdown of Vienna Nuke Talks
YesterdayZemmour Says He 'Would Like' to Withdraw France From NATO
YesterdayIsraeli Deputy Defence Minister Dodges Question About Tel Aviv's Complicity in Natanz Blast
YesterdayCorridors of POWDER: Brits React to News of Drug Sniffer Dogs in Parliament
YesterdayMercedes' Hamilton Takes Win in First Saudi Arabian GP After Chaotic Battle With Verstappen
YesterdayTucker Carlson Was Reportedly Friends With Hunter Biden, Intervened in Media Report on His Behalf
YesterdayPutin: People Vaccinated With Sputnik V Should Not Be Deprived of Right to Travel
YesterdayPolish Authorities Officially Confirm Detention of Russian Ship Ruslana
YesterdayBelgian Police Use Tear Gas After Clashes With COVID-19 Protesters Broke Out in Brussels - VIDEO
YesterdayTrump's Media Company Says Raised $1Bln From Investors
YesterdayOrigin of Water on Earth: Mystery Solved?
YesterdayIdentity of Baroness Mone's Accuser Reportedly Revealed as She Denies Racist Claims Against Her