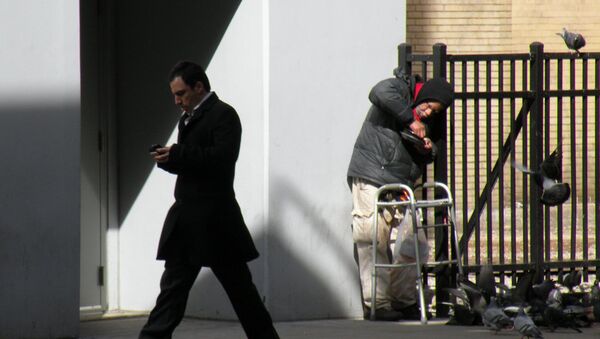 © Flickr / John W. Iwanski
Subscribe
International
India
Africa
People are getting poorer, and by 2020, 1 percent of the world's population will own more than the rest of the world, according to Oxfam's Nick Bryer, who told Radio Sputnik how agreements such as TTIP perpetuate the trend, and why it is increasingly a threat to democracy.

The total wealth of the poorest half of humankind has decreased by more than $1 trillion since 2010, in part as a result of measures such as the Transatlantic Trade and Investment Partnership (TTIP), the international justice and poverty confederation Oxfam told Radio Sputnik following a report published on Monday.

Oxfam's Nick Bryer told Radio Sputnik that growing inequality is a threat to democracy, as only the wealthy can enhance their political relevance through activities such as lobbying. He also noted that trade agreements such as TTIP perpetuate inequality because of their secrecy and preference for the interests of the wealthy over financial regulations and labor rights.

"The trade agreements are a good demonstration of the kind of situation that we're facing, and also a contributing factor," Nick Bryer, head of Oxfam's Inequality department told Radio Sputnik.

World
Half of World's Population Became $1Trln Poorer in 5 Years
He noted that wealthy individuals have hidden $7.6 trillion in tax havens, possible thanks to decreased financial regulation. The amassed money then cannot be use to stimulate the economy and finance projects such as schools, as it would if it was not hidden away in tax havens.

According to the report, just 62 individuals had the same wealth as 3.6 billion people – the bottom half of humanity. However, in 2010 the poorest half of mankind owned as much as the top 388 individuals.

"The wealth owned by the bottom half of humanity has fallen by a trillion dollars in the past five years. This is just the latest evidence that today we live in a world with levels of inequality we may not have seen for over a century," Oxfam's report, "An economy for the 1%," said.

Climate Change to Push Over 100 Million People Into Poverty by 2030
According to Bryer, the agreements make it more difficult for governments to tackle issues such as inequality because of limits on regulation. One example is skyrocketing executive pay, which is now as much as 300 times the pay of the average worker, compared to 30 times average workers' pay around 35 years ago.

He also noted that the biggest incomes are being generated from the ownership of property, rather than from employment, which declawed labor laws and tax cuts are helping perpetuate.

"For instance, if the super-rich aren't paying their fair share of tax, it then gets shifted to lower-paid workers, again, disproportionately women. It gets shifted to consumption taxes, again, tends to impact more on women, who control a lot of household expenditure, and it means there's less money to spend on things like schools and hospitals," Bryer told Radio Sputnik.

Bryer noted that economic inequality contributes to gender inequality, as making schools private, for example, leads girls to overwhelmingly miss out on them.

Oxfam is an international confederation of 17 organizations tasked with finding solutions to end poverty and what it sees as injustice around the world. It operates in some 100 countries worldwide.