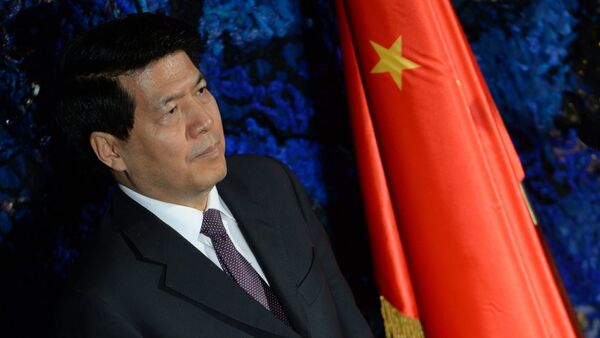 MOSCOW (Sputnik) — In 2013, Chinese President Xi Jinping proposed the construction of a new Silk Road to facilitate the direct flow of goods from the Pacific Ocean to the Baltic Sea. The megaproject is intended to connect China with Europe and strengthen economic ties between Asia, Europe and the Gulf states.

"Now, many countries are showing an active interest in the Silk Road Economic Belt initiative, multiple agreements and memorandums on bilateral and multilateral levels have been signed. Russia, as the largest neighbor and a strategic partner of China, is an important participant in the construction of the Silk Road, which has significant advantages," the ambassador pointed out.

Commenting on the cooperation in other spheres, the envoy added that China had begun construction on its leg of the Power of Siberia gas pipeline.

"Construction works have already begun in China to build the eastern string of the pipeline that has been dubbed ‘the deal of the century’ by the media," Li said.

Additionally, the two countries have signed an agreement to prepare project documents for the construction of a high-speed railway between the Russian cities of Moscow and Kazan, the ambassador said.

"Cooperation between China and Russia regarding the main line has entered the stage of practical realization," Li underscored.

The two neighbor nations have sped up a joint project to design a long-haul wide-fuselage aircraft, having "stepped up cooperation in building wide-body planes," as well as on nuclear energy, electricity, chemical industry and production of natural resources, according to the diplomat.

000000
Popular comments
Well Russia's part should be Russian ..No? The SILK Road, will bring prosperity. But I ask myself. Russia have plenty roads. What Russia need is a super highway. 6 lanes each side. The safest in the world. With truck stops. That's a great Russian SILK road. Should enter Europe thru Belarus ONLY. Russia have trains. Produce new ones to move the hauls. EEU was investing in Russia's infrastructure to facilitate resource movements and goods. That SILK road sounds like a historic route. Not a modern commercial one. Tourists would love it. With old day transportation etc. Eco buses would move the tourists. Russia builds half the buses. I think Russia and China are partners. But not allies. And China wants ALL. While Russia gets...Investment? BAH. Russia MUST advance in the northern sea route. ALONE. No JAPAN either. Unless Russia gets similar chances from JAPAN. Measure real good what they bring to the table. If not Russia can go alone. Russia can invest all by itself.
cast235
19 January 2016, 03:59 GMT
000000
As long as the importance is a two way street....