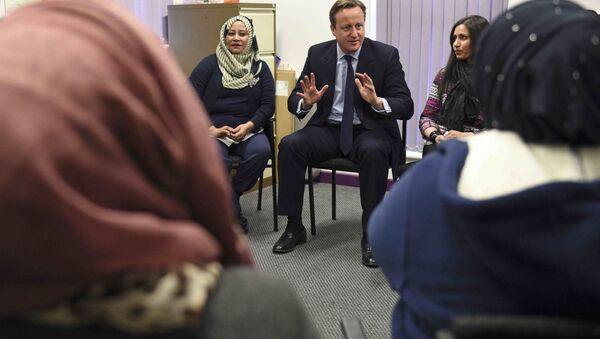 Britain's Prime Minister has been accused of being a hypocrite for saying Muslim women must speak better English after it emerged he cut funding for migrant language classes in 2011.

Forcing women living in ethnic communities in Britain to improve their English appears to be the latest knee-jerk anti-immigration policy purported by the Prime Minister. But the irony that he announced US$28 million (£20m) to fund the classes after slashing funding for basic English lessons five years ago hasn't been lost on many Muslim groups in Britain.

"The irony of the Prime Minister calling for more resources to help migrants learn English when his government cut the funding classes in 2011 has not been lost on many people," Mohammed Shafiq, chief executive of the Ramadhan Foundation said.

By targeting just muslim women and not everyone shows the neoconservative agenda against Muslims.

Casually linking language courses to extremism, David Cameron has announced that around 190,000 Muslim women in Britain who speak little or no English will face language tests if they want to remain in the UK.

"The Prime Minister David Cameron and his Conservative government are once again using British Muslims as a political football to score cheap points to appear tough," Shafiq said.

Choosing to highlight his proposals during a visit to a mosque in Leeds, England, David Cameron warned that a lack of language skills could make people "more susceptible" to recruitment propaganda from Daesh, also known as Islamic State.

. Women should have the opportunity to learn English full stop. Why link it to radicalisation/ extremism/ CT? @sundersays @Independent

Cameron Playing 'Political Football' by Linking UK Muslims With Extremism
"There are three million Muslims in this country and the Prime Minister chooses to focus on a very small minority of extremists when clearly the majority of British Muslims reject extremism," Mohammed Shafiq said.

He suggested instead that "the best way to confront it [terrorism] is to build support within Muslims and support the work done across the country, and not lashing out and denigrating Muslims".

"His clumsy and simplistic approach to challenging extremism is unfairly stigmatizing a whole community. There is a real danger that it could end up driving further radicalization, rather than tackling it."

Following the PM's "clumsy", "ironic" and "cheap" announcement that all Muslim women must learn to speak English in an attempt to stop more homegrown jihadis from becoming radicalized, Downing Street confirmed that US$28 million (£20m) would be set aside for new language courses in England only.