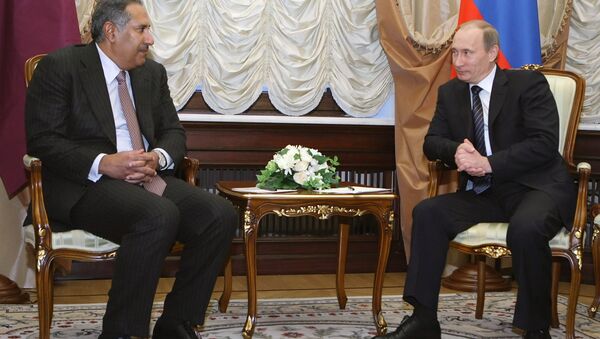 The situation in Syria will be on the table during negotiations between Qatari Emir Tamim Hamad al-Thani and Russian President Vladimir Putin, according to the Qatari foreign minister.

Al-Thani is in Moscow on an official trip. He has been meeting with Russian lawmakers since morning and is due to hold talks with President Putin later on Monday.

"There is no doubt that the situation in Syria will be on the table during negotiations. Syria is an important topic for us," Foreign Minister Khalid Bin Mohammed Attiyah told RIA Novosti, adding the two leaders "are able to bring stability to Syria."

Syria has been locked in an armed conflict that killed over 250,000 and displaced millions since 2011. The crisis has seen troops loyal to Syrian President Bashar Assad fighting against opposition factions and extremist groups, such as the Islamic State (ISIL) also known as Daesh, which is prohibited by many countries, including Russia and the United States.