Russia Able to Partake in PACE in September After Parliament Elections 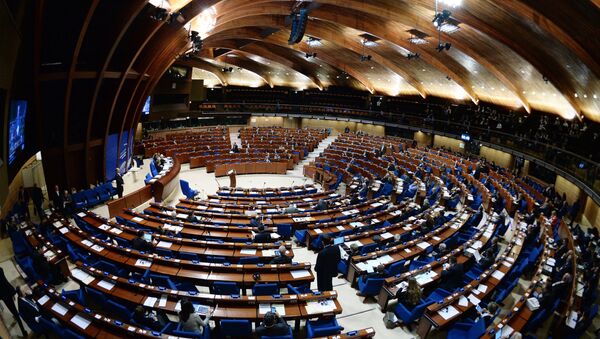 © Sputnik / Vladimir Fedorenko
/
Go to the mediabank
Subscribe
International
India
Africa
Russia’s decision to skip the winter session of the Parliamentary Assembly of the Council of Europe (PACE) means Moscow will not be able to participate in the work of the assembly until its September session which is due right after elections to the Russian State Duma.

MOSCOW (Sputnik), Daria Chernyshova — Earlier in the day, speaker of Russia's lower house of parliament Sergei Naryshkin said Russia would not participate in the upcoming winter PACE session and would not present the credentials. The decision also means Russian credentials cannot be challenged in the body which imposed sanctions on the work of Moscow delegates.

"Credentials can only be presented in each January part session or after general elections. This means the next moment to present the Russian credentials would be after the State Duma elections, at the beginning of the 4th part session in September / October. In between the Russian delegation would not be able to participate in the Assembly's activities," Dutch lawmaker and the head of PACE group of European United Left Tiny Kox told Sputnik Monday.

He clarified that if no credentials were presented, they could not be either reviewed or challenged.

PACE Relations With Russia to Depend on EU Stance – Russian Lawmaker
Kox noted that Russia’s decision not to present credentials in January would not be seen as a positive gesture, but hopefully the sides would use the time between January and September to overcome tensions, "so that from end of this year the Russian Parliament will function again in our Assembly."

A PACE resolution in April 2014 deprived the Russian delegation of its voting rights, following Crimea’s reunification with Russia. Russian lawmakers were barred from participating in PACE's three key bodies — its bureau, its presidential committee and the standing committee.

The 2014 resolution curbing Russia’s rights in PACE was renewed in April 2015, while the reconfirmation of the delegation's credentials was slated for the winter session.

The elections to the Russian State Duma are set to take place on September 18, 2016.