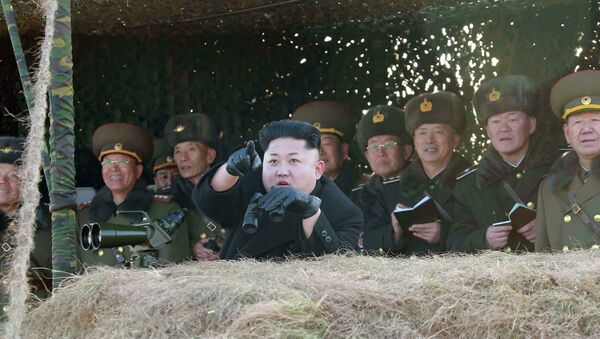 © REUTERS / KCNA
Subscribe
North Korea has been honing its drone system for over 25 years, developing advanced drones believed to be capable of both airstrikes and deep infiltration. Here's how they did it.

Drone incursions from the North have created doubts as to whether South Korea can defend its airspace. North Korea is believed to possess around 300 drones according to South Korean military figures, some of which are capable of carrying out "suicide" airstrikes as well as reconnaissance.

Alongside nuclear weapons and missiles possessed by or stationed on both sides, North Korean drones could provide Pyongyang with both artillery targeting intelligence and the ability to eliminate South Korean high-value targets without the use of more risky direct assassination.

According to defense researcher Joseph Bermudez, North Korea acquired its first unmanned aerial vehicles (UAVs) from China between 1988 and 1990. The development began at around the same time as  South Korea's defense ministry announced that it sought to build a UAV fleet.

By late 1993, North Korea is said to have begun producing its own analogues of the Chinese Xian ASN-104 UAV, initially called the Panghyon ("Fender"). A later model based on the more advanced ASN-105, presumably called Panghyon-2 is also believed to be produced.

By 1994 North Korea gained access to the Syrian military's Tu-143 Reys reconnaissance UAVs, which are powered by a turbojet engine. North Korea is alleged to have weaponized the drone, making it capable of carrying nuclear or biological weapons.

Seoul Decides to Develop Drones to Monitor Border With North Korea
The same year, North Korea bought 10 export variant Pchela-1T ("Bee") drones from Russia's Kulon Scientific Research Institute. The Pchela-1T was presumably exported as the Shmel-1 ("Bumblebee") base variant earlier developed by Yakovlev Design Bureau, and had television controls, but was incapable of flying at night.

North Korea also expressed interest in purchasing more Pchela drones during Kim Jong Il's visit to Russia in 2001. At around the same time, the institute developed the Pchela-1IK, which had infrared controls, making it capable of flying at night. 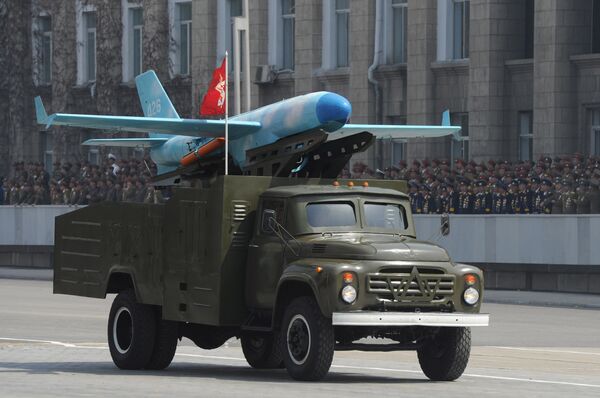 In 2005, South Korean intelligence came to possess a detailed North Korean plan of action in case of war. The plans showed that North Korea would direct its military from deep underground bunkers, making decisions based on intelligence from spy satellites and UAVs.

At the time, South Korea reacted to the idea that the North would have sufficient UAVs with skepticism, but admitted that work in the direction was probably underway.

South Korea to Spend $769Mln on Upgrading US-Made Missile Defense System
South Korea first learned of UAV use by the North in 2010, when it detected an unidentified UAV on the border over the Yellow Sea. The UAV was apparently evaluating North Korean artillery exercises and monitoring the reaction of a nearby South Korean unit. South Korea's military at the time believed the drone to be a Tu-143 or its derivative.

In February 2012, a military source told Yonhap News that North Korea was developing a strike drone based on the US-made MQM-107 Streaker drone, purchased from a Middle Eastern country, believed to be either Syria or Egypt. The drone was then shown during a North Korean military parade in March 2012 (seen above on a ZiL-130 truck chassis).

In 2013, stills on North Korean television showed the drones being used in a military exercise:

The stills showed three UAVs taking off, with some exploding in mid-air to destroy an aerial target, while others attack a target on a mountainside.

South Korea only rang the alarm bells in April 2014, when three "mini-UAVs" were found in South Korea, apparently sent in from North Korea. The UAVs were programmed with GPS coordinates to take photographs of strategic installations in South Korea, including the presidential administration in Seoul, and likely crashed after running out of fuel.

Examination of the drones showed them to be modifications of Chinese-made Sky-09 and UV10 drones, the use of which by North Korea was previously unknown to South Korean intelligence.

Defense Official Says Seoul to Develop Drones to Counter North Korea
It was later found that the drone was previously seen in photographs of Kim Jong Un visiting an air force base in March 2013. The finding led South Korean officials to assume that multiple successful drone flights were already made over South Korea without being noticed.

South Korea deployed a radar system to detect low-flying drones after the discovery, believed to be operational in late 2015. South Korean forces failed to intercept the drones the first two times North Korean UAVs were detected flying over the DMZ by the system between August 22 and August 24, 2015.

The South Korean forces were more effective in deterring the drone in the latest incident on January 13. Ground troops fired warning shots with small arms, while audio systems sounded a warning to the other side of the DMZ, leading the drone to retreat back to North Korean territory.

Such a system is no guarantee, however, as it would require significant troop concentrations along every part of the DMZ. Other aspects of the North Korean drone program, such as launch sites and possible radar evasion capabilities remain unknown.