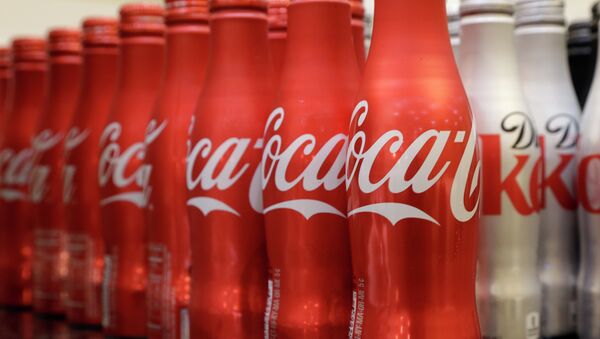 © AP Photo / Wilfredo Lee
Subscribe
International
India
Africa
How much is your credibility worth if you are a science researcher espousing the benefit of sweetened beverages?

Drinking Soda’s Not Bad for You, According to Coke-Funded Research
Around $1,000 was reportedly given to each researcher who wrote about diet cola's fat-burning benefits.

A professor at a top-10 ranking British university has probably put his long career in biology at risk by promoting the "benefits" of diet drinks in a "scientific" study. The obesity study turned out to be backed by beverage giants Coca-Cola and PepsiCo, the largest world producers of diet soda.

Coca-Cola and PepsiCo were revealed to have been behind the ILSI Europe Institute-backed study which claimed low-energy sweeteners don't increase obesity and "might be expected to reduce energy intake."

The institute, which touts itself to be a non-profit organization seeking to provide science that improves human health, included both companies' representatives in the task force group on the eating behavior and energy balance.

The 14-page research led by professor of biological psychology at Bristol University Peter Rogers was published in the International Journal of Obesity in November, 2015.

Only one paper out of 5,500 reviewed gave the group of scientists reason to believe that diet beverages might help consumers lose weight better and faster than water. That paper was funded by the American Beverage Association.

"To suggest that diet drinks are more healthy that drinking water is laughable unscientific nonsense," The Independent quoted advisor to the National Obesity Forum Dr. Aseem Malhotra as saying. He added: "If you want good science you cannot allow corporate sponsorship of research."

According to official statement of the University of Bristol, the information published in the journal was revised and proved by other scientists.

University Returns $1 Million Grant to Coca-Cola Over Questionable Research
"This research was published in the International Journal of Obesity, a peer-reviewed journal, which means the data and conclusions have been scrutinised by other scientists," the spokesperson said. "We therefore stand by the findings. It was funded by a range of bodies including the NHS and European Union, as well as ILSI Europe."

The question of the impact of industry on scientific research has been raised previously by beverage giants. The University Of Colorado School of Medicine has returned a $1 million grant from the Coca-Cola Company after media outlets raised concern that the money was used to fund an advocacy group that downplayed the link between obesity and soft-drink consumption.

Last year Coca-Cola gave $1.5 million to launch the Global Energy Balance Network (GEBN) nonprofit group to push the idea that Americans spend too much time and energy worrying about what they put in their bodies, and not enough time and energy on exercise.