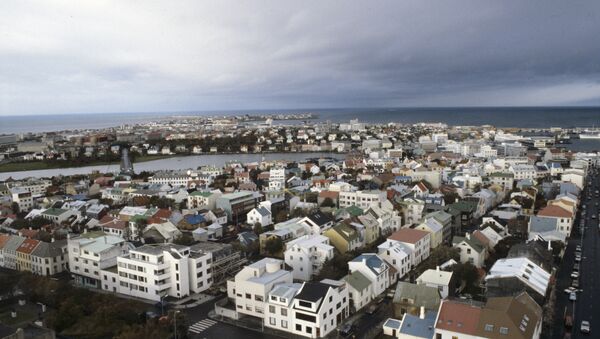 © Sputnik / Yuryi Abramochkin
/
Go to the photo bank
Subscribe
A prosecutor in Iceland is calling for harsher jail sentences for three bankers charged with price manipulation of shares in Landsbankinn.

Sigurjón Árnason, Ívar Guðjónsson and Júlíus S. Heiðarsson face just nine to twelve months in jail. They are also accused of mis-guiding investors, creditors, the authorities, and the community at large.

‘Greed, Fraud, Dishonesty’: Bernie Sanders in Policy Speech on Wall Street
Still, the aftermath of their trial is seen by some as a victory for the Icelandic justice system. Their sentencing brings the total number of bankers jailed for wrongdoing in Iceland since the global financial meltdown of 2008 to 26. That amounts to a total of 74 years worth of prison sentences.

Meanwhile in the United States, prosecution for white-collar crime stands at a 20-year-low and prosecution of corporations dropped by 29 percent between 2004 and 2014.

The think-tank Center for American Progress's ThinkProgress.com attributes the trend to the Department of Justice’s focus on negotiating settlements rather than taking cases to courts. These numbers hold still despite the banking industry’s links to the financial crisis.

“An industry that created a super-sized housing bubble then mishandled trillions of dollars’ worth of mortgage paperwork in order to facilitate a foreclosure epidemic that’s ruinous for the national economy has, in effect, gotten away with it. That makes another crisis more likely,” said Corporate Criminologist William Black.

Eric Holder Back on Wall Street After Years of Refusing to Jail Bankers
Back in Iceland, the government decided not to let its banks fail and seek a bailout from the International Monetary Fund. Despite this, the economy recovered and its growth even peaked above the average for European Union countries in 2012.

Its bailouts, were directed at citizens through mortgage-debt forgiveness. Some of these loans amounted to 110 percent of the actual value of homes they were linked to.

Still, it must be noted that comparing the two nations is not particularly fair as the US is about 1,000 times larger in economic output than Iceland.

Nonetheless, some can be taken from the Iceland story following the disastrous narrative of bank bailouts, settlement deals, and lenient prosecution toward major corporate players partly responsible for the downfall.

000000
Popular comments
"Still, it must be noted that comparing the two nations is not particularly fair as the US is about 1,000 times larger in economic output than Iceland." Even more "still' is the fact that money is money, people are people, character is character and a crime is a crime no matter how beautiful, or not, is the mind that conspires to steal another man's property or worth. Iran has set the standard; hang them all.
marcanhalt
16 January 2016, 20:00 GMT
000000
We should follow their exemple! Nice move Iceland.