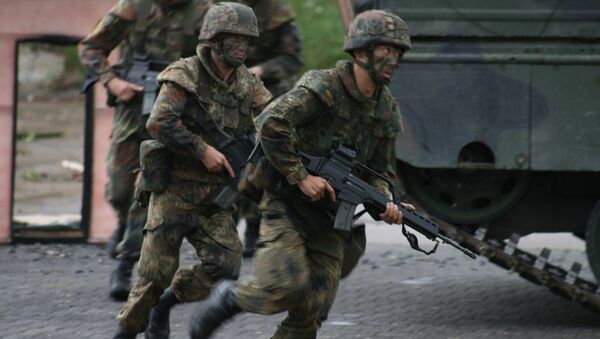 The proposal comes two weeks after hundreds of women were attacked by aggressive men of allegedly Arab and North African origin in a number of German cities.

After the attacks on women in Cologne and a number of other German cities, German Finance Minister Wolfgang Schäuble has called to consider the deployment of Bundeswehr forces within the country.

"We will have to deal with the question of why almost all other European countries have clear legal regulations enabling them to use their armed forces to support the police — and we don't", Schäuble said in an interview with the German newspaper Sueddeutsche Zeitung.

In his opinion, Germany needs to enhance its security forces as well as create legal foundations for the police and the intelligence services as the population expects the state to be responsible for guaranteeing its security.

"However, there may be the situation when the central police forces and those of the federal states are exhausted. In this case, every other country in the world would deploy soldiers if necessary," Schaeuble said.

German Authorities Confirm Migrants Behind Attacks in Cologne
Therefore, the politician appealed for the creation of a legal basis that will enable deployment of military forces inside the country. This might require the changes in the country's constitution, which provides for the deployment of the military only during natural disasters.

On New Year's Eve, hundreds of women in Cologne were reportedly robbed, threatened and sexually assaulted by small groups of aggressive men, allegedly mostly of Arab and North African origin. Several similar incidents were reported on the same day in Frankfurt, Dusseldorf and Berlin.