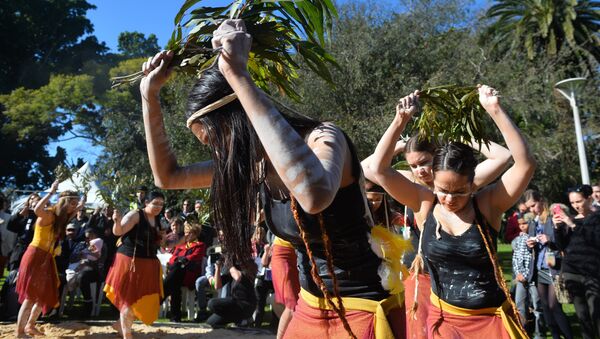 © AFP 2021 / Peter PARKS
Subscribe
A mobile game has been pulled from the iTunes and Google app. stores following outcry over game play involving the killing of indigenous Aboriginals.

Australia Highway May Destroy Aboriginal Site 'Older Than the Pyramids'
One message in the game reads, “You also have to fight with Aboriginals- You’ve invaded their home!”

A video walkthrough, which has been removed from YouTube, showed the player beating an Aboriginal to death with a stone axe before being rewarded a boomerang.

The video was part of a series posted by user “R2 Darksaber.”

According to gaming-news website Player Attack, “The video shows a first-person view of beating an Aboriginal man to death with a blunt weapon while the voiceover cackles gleefully.”

Before being removed, the game received a score of 4.2 out of 5 stars along with 1,200 reviews on Google’s app. store. The $4.49 app. was rated as appropriate for children aged 12 and up.

But, not everyone was happy.

Georgia Mantle was outraged after a friend tweeted a screenshot of the game.

So, she launched a Change.org petition Friday calling for its removal. It has gained more than 48,300 signatures.

“There have been a few trolls who seem to think the murder of Aboriginal characters is not any different to the deaths of other characters in other video games, but I have taken my time to point out that is different because it has historical reflections of the real experiences of Aboriginal peoples,” Mantle told the Guardian. “And that fact that this game encourages you to kill people based on their race making it very different to violence in other games.”

Survival Island 3 now is banned from Google and iTunes app stores in the U.S. and Australia.

000000
Popular comments
Not so different from wayne's movies about the Indians..