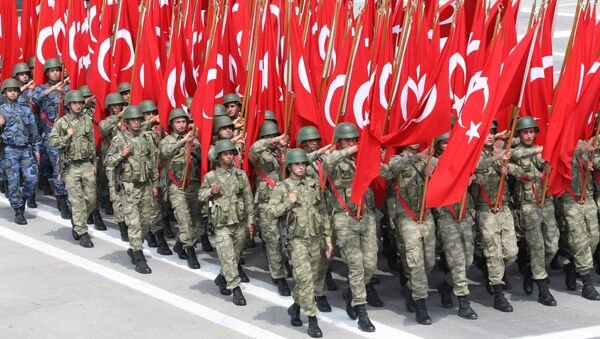 © AFP 2021 / ADEM ALTAN
Subscribe
Ankara is determined to beef up Turkey's military presence in the Middle East and Africa; after concluding an agreement with Doha to build Turkey's first Middle Eastern military base in Qatar, Ankara has unveiled its plans to create a new military installation in Somalia.

Ankara is seeking to expand Turkey's influence beyond the Middle East to Africa in a bid to transform Turkey from the regional state into a sort of neo-Ottoman Empire.

"Turkey is building its first base in Africa… The Turkish army intends for the facility to be a training center for Somali troops. The fledgling Somali National Army — with the help of African Union troops and American commandos — has been fighting a war with Al-Shabaab insurgents for years," American reporter Kevin Knodell writes in his article for WarIsBoring.com, quoting Turkish Foreign Ministry official Emil Tekin.

Daesh on Turkey's Doorstep: Erdogan's Regional Policy Bears Bitter Fruit
The initiative has followed the agreement signed between Doha and Ankara to kick off Turkey's first military base in the Middle East.

Remarkably, Qatar is already home to the American Al Udeid military base, which has around 10,000 US troops. According to diplomats, the new Turkish installation in Qatar is expected to accommodate 3,000 soldiers.

"Turkey diversifies allies with first Mideast military base in Qatar; is it possible also in Djibouti and in Mogadishu, Somalia, Soon?" Geeska Afrika Online reported on December 26, 2015, as if they had seen it in a crystal ball.

"Though this will be Turkey's first permanent military base in Somalia, the Turks are hardly newcomers. During the years of the Ottoman Empire, Turks frequently made their way to Somalia as both warriors and merchants," Knodell continues.

By strengthening military ties with its Sunni Islamic allies, the Turkish leadership is behaving like a bull in a china shop toward its neighbors, Syria and Iraq.

Erdogan Wages War on Professors, Scholars Fight Back for Academic Freedom
On December 4, Turkey unilaterally deployed 150 troops and 25 tanks in northern Iraq near Mosul without permission from Baghdad. The de-facto "invasion" was carried out under the pretext of war against Daesh (Islamic State/ISIL) and the necessity to ensure the security of Turkish operatives in the region.

The Iraqi government expressed its vocal dissatisfaction with Ankara's move; however, the Erdogan government turned a deaf ear to Baghdad's displeasure.

At the same time, it is no secret that Ankara has long been allowing foreign jihadists to penetrate into Syria through the Turkish border.

Recep Erdogan's request to establish a US-Turkish 'no-fly' zone over Syria was aimed at splitting up the country, Bangkok-based geopolitical analyst Tony Cartalucci wrote in his article for New Eastern Outlook in October 2015.

"Long sought after 'buffer zones' also sometimes referred to as 'free zones' or 'safe zones' still stand as the primary strategy of choice by the US and its regional allies for the deconstruction of Syria's sovereignty and the intentional creation of a weak, failed state," the analyst emphasized.

Kurds in the Mix: Real Reason Behind Russo-Kurdish Cooperation
Furthermore, while conducting its illegal oil trade with Daesh (thus facilitating the group's prosperity), the Erdogan regime cracked down on the Kurdish Peshmerga, by bombing PKK and YPG fighters — the US-led coalition's allies in fighting Daesh.

Ankara's aggressive military policy has led to the ruining of the longstanding relationship between Russia and Turkey, which nearly ground to a halt after a Turkish F-16 jet shot down a Russian Su-24 bomber in Syrian airspace.

In this light, Erdogan's decision to project Turkey's military power outside of the country's borders should come as no surprise.

"In 2016, don't be surprised to see Turkish troops and advisers pop up in surprising places," Knodell concludes.