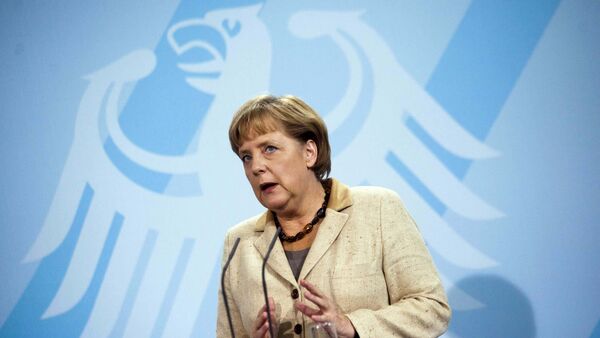 According to Citi Research's November report, the German Chancellor's popularity rates plummeted to 49 percent in November from 67 percent in August, bringing into question Merkel's political prospects.

Citi's chief global political analyst Tina M. Fordham went even so far as to assert that "for the first time in a decade in power, German Chancellor Angela Merkel's political future is in question."

"Criticism of Angela Merkel's open-door refugee policy in Bavaria, the southern German state where most migrants enter the country, erupted on the German chancellor's doorstep on Thursday in the shape of a busload of 31 refugees," Ruth Bender of the Wall Street Journal reported on January 14, adding that Germany's local authorities are outraged by Merkel's decision "to accept an unlimited number of refugees" from war-torn regions of the Middle East such as Syria and Iraq.

Björn Höcke, a senior member of the right-wing Alternative for Germany (AfD) party in Thuringia, proposed to remove the German Chancellor from her office "in a straightjacket" during the latest party rally in Erfurt, according to Germany's news magazine Focus.

Maybe it is time for Angela Merkel to step down, before the federal election of 2017?

On the one hand, the move would mean the abolition of Merkel's controversial open-door refugee policy and the re-adoption of a more prudent, step-by-step process of integrating newcomers into European society.

Right-Wing German Gangs Pledge to Fight 'Sex Jihad'
"Ms. Merkel's open door policy will only work if it is accompanied by a concentrated effort at integration which preserves her nation's postwar values. Germany — and its chancellor — cannot tolerate another Cologne," The Financial Times warns.

On the other hand, experts suggest that currently there is no alternative for Merkel as a powerful EU leader.

"Merkel has arguably been Europe's strongest leader since the financial crisis and was front and center handling issues like the Greek crisis and negotiating the Minsk Agreements in the last year," Elena Holodny of Business Insider notes.

She quotes Citi's global political analyst Tina M. Fordham, who argues that "although in our view the Chancellor could very well weather yet another test of her leadership and go on to win a fourth term, we regard a Merkel-exit ahead of German elections (due in 2017) as one of the most destabilizing political risks for the EU, and one with the potential to impact markets."

"Merkel's extraordinary welcome to refugees will draw fewer followers inside her own country, and virtually none outside it. This will undermine her political position, and could encourage a domestic challenger over the coming months. It creates a dramatic change in how Europe interacts with itself and with the rest of the world," they underscore.

​According to the scholars, a "weaker Merkel" will make it more difficult for the EU to cope with increasing challenges and will leave Europe less able to respond collectively to crises.

Is this the end of Europe's open borders? @TinaFordham1 joins #WDYM on the political fallout from the #ParisAttacks pic.twitter.com/caZS6xNDDr

​"More resentment toward Germany from others in Europe will undermine its political capital," the scholars add.

The question remains open whether Merkel's potential resignation would have ended the ongoing refugee crisis. Indeed, the EU does need a strong leader.

Unfortunately, the German Chancellor apparently has no clue how to bring the crisis under control.

During her recent speech at an event in Mainz, Angela Merkel admitted: "Now all of a sudden we are facing the challenge that refugees are coming to Europe and we are vulnerable, as we see, because we do not yet have the order, the control, that we would like to have."