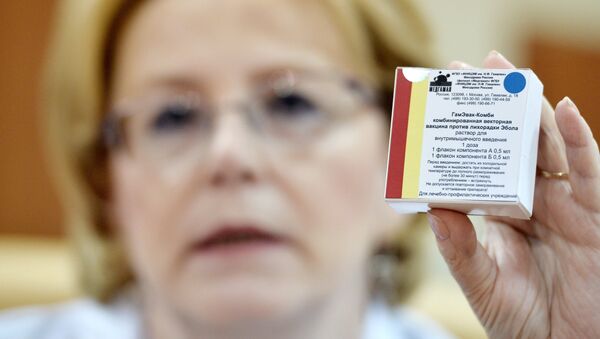 Russia will present its vaccine against Ebola on January 25. Its further tests will be conducted under the auspices of the UN and WHO.

MOSCOW (Sputnik) – Further tests of the Russian vaccine against Ebola in Guinea will be conducted under the observation of the United Nations and the World Health Organization, Russian Health Minister Veronika Skvortsova said Friday.

“Further utilization of the vaccine in Guinea, and possibly in other African countries, will proceed under the observation of the United Nations Organization and WHO,” Skvortsova told journalists.

Information on the Russian vaccine against the Ebola virus has so far only been shared with Russian President Vladimir Putin, but will be given to the World Health Organization January 25, Skvortsova said.

Ebola Kills Sierra Leone Boy as West Africa Marks End of Virus Outbreak
WHO has said that the vaccine must be officially registered and tested before it is used on the general public.

“We have so far not given any information to anyone except for the president of the Russian Federation. But Sunday after next I’m flying with a group of colleagues to the World Health Organization’s executive committee…and during the WHO executive committee meeting there is a special discussion planned and our medication will be presented,” Skvortsova told journalists.

The possibility of selling the Russian patent on producing a new vaccine against the Ebola virus to other countries may be discussed with the World Health Organization.

“This will be decided after discussing it with the World Health Organization and the special committee on Ebola that the United Nations Organization has founded. We’re ready for any cooperation but will be even more open after the patent is received,” Skvortsova said.

“Studies are currently underway in Guinea with the US vaccination from the Merck company. If a decision is made for us to join a comparative study, we then could compare the effectiveness of our vaccines with the effectiveness of Merck’s vaccines, and we’d be for this because we are completely convinced in the material that was produced,” she added.

On Wednesday, Skvortsova said that Russian scientists had developed and registered two highly-effective vaccines against Ebola. The vaccines have been tested by the specialists of Russia's Health Ministry and Defense Ministry, according to Skvortsova.

The most recent Ebola outbreak began in December 2013, spreading across Western Africa from Guinea to Liberia and Sierra Leone, killing over 11,000 people in these three countries. On Thursday, the WHO announced the end of the Ebola outbreak in West Africa, however later in the day media reported that the deadly disease had killed a boy in Sierra Leone.