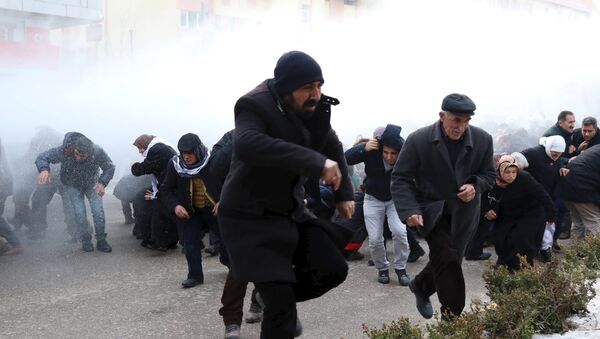 Reports of Turkish authorities investigating academics critical of the government in Ankara over its violence against Kurdish minorities in the southeast is a worrying development, US Ambassador to Turkey John Bass said in a statement on Friday.

The arrests follow a massive Turkish investigation of more than 1,200 academics calling themselves the "Academicians for Peace." The group released a signed petition last week calling for an end to Ankara’s violent attacks against Kurds.

"We are seeing reports of academics being investigated and subjected to penalties for expressing their opinions about the conflict in the southeast…we are…concerned about this pressure having a chilling effect on legitimate political discourse across Turkish society," Bass stated.

The 1,200 academics under investigation in Turkey include prominent foreign intellectuals. The government has accused the academics of spreading "terrorist propaganda" and "insulting Turkish institutions" based on their criticism of Ankara's policy.

Bass emphasized the US view that "expressions of concern about violence do not equal support for terrorism," and criticism of the government "does not equal treason."