© AFP 2023 / Leon Neal
Subscribe
International
India
Africa
The widow of an American contractor reportedly killed in Jordan by a Daesh (Islamic State) militant has filed a lawsuit against Twitter for providing the radical group with a platform for spreading its deadly ideology, increasing the pressure on social media networks.

White House Plans Counter-Attack in Daesh Propaganda War
Tamara Fields of Florida has sued the popular social networking company for knowingly allowing Islamists to use their products to distribute propaganda, raise money for unlawful activities and recruit new members, Reuters reported. She highlighted that Twitter has given “unfettered” ability to extremists to run their social media accounts for years.

On November 9, 2015, he was killed by a Jordanian police officer carrying out a shooting attack at the training center where Fields worked, killing five Americans. Daesh later claimed responsibility for the attack and praised it.

“Without Twitter, the explosive growth of ISIS over the last few years into the most-feared terrorist group in the world would not have been possible,” the complaint filed by Tamara Fields in federal court reads.

Fields is now seeking triple compensatory damages from the company for alleged violations of the US Anti-Terrorism Act. 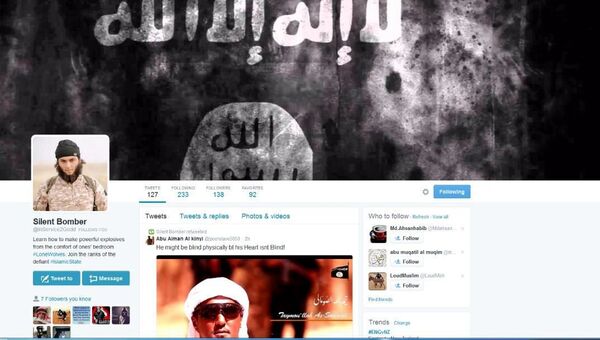 The San Francisco based company released a statement Wednesday in response to Fields’ complaint. The statement claims there are no legal grounds for a trial, but offers condolences for the woman’s “terrible loss.”

“While we believe the lawsuit is without merit, we are deeply saddened to hear of this family’s terrible loss,” the statement reads. “Violent threats and the promotion of terrorism deserve no place on Twitter and, like other social networks, our rules make that clear.”

'Education Management Professional’: Daesh Recruit Sells Self on LinkedIn
The Obama administration set up a task force last Friday to oversee various extremist groups that use media platforms such as Facebook, YouTube and T witter to organize attacks and attract potential recruits.

Media companies have faced intensified pressure from the federal government amid recent terrorist attacks. Social networking firms were urged to thoroughly examine user accounts and delete those that were associated with extremists, USA Today reported.

Twitter claims it has honored 42 percent of the 1,003 removal requests submitted by governments in the period from January to June 2015, Reuters wrote, noting that 25 requests from the US government have not yet been implemented.