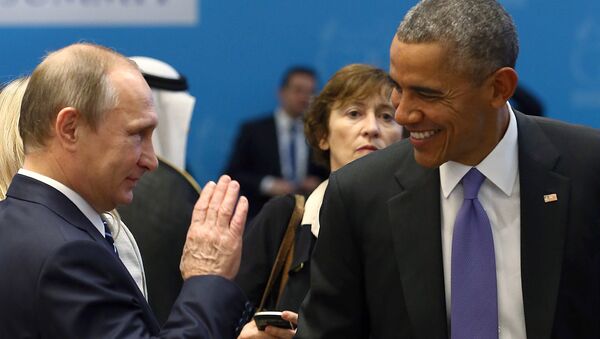 © REUTERS / Kayhan Ozer/Pool
Subscribe
International
India
Africa
The American political and military leadership seems to be warming up to the idea of working together with Russia to bring an end to the Syrian conflict, which, as Moscow has repeatedly stated, can only be resolved through multilateral efforts.

When it comes to the war-torn Arab country, Russia, according to American journalist David Ignatius, "is emerging as an essential diplomatic and security partner for the United States."

The Obama administration officials consider working with Moscow as "the best of a bad set of options," but understand that they "can't live without" Russian President Vladimir Putin when it comes to bringing lasting peace to Syria, he added in an opinion piece for the Washington Post.

Bilateral cooperation is already taking place despite difference, particularly with regard to President Bashar al-Assad and Syrian opposition groups.

#Gatilov: We believe that the Syrian opposition delegation should reflect a broad spectrum of the opposition

​On Wednesday, Putin and Obama discussed ways to resolve the Syrian crisis during what the Kremlin described as "a substantive discussion." Both leaders reaffirmed support for the UN-sponsored efforts, while the Russian leader repeated his call for creating a broad coalition against Daesh and other terrorist groups fighting in Syria.

Syria was also one of the key topics, which Russian Foreign Minister Sergei Lavrov and US State Secretary John Kerry discussed on Monday. The Russian top diplomat and his US counterpart are expected to meet next week for more talks on Syria.

Final Countdown? Syrian Army Advances on All Fronts
​In addition, both countries have made steps indicating that they are willing to bridge their difference. In a recent interview with Germany's Bild newspaper, Putin pointed out that al-Assad "made many mistakes in the course of the Syrian conflict." At the same time, US officials have toned down the rhetoric that the Syrian president has to leave office before the peace process is launched.

Russian officials have long maintained that the future of Syria could only be determined by its own people. In other words, Moscow has never insisted that Assad should necessarily stay or go.

"For President Obama, the willingness to work with Putin is an act of foreign policy realism or desperation, depending on your point of view. Some would argue that in Syria, the two converge," Ignatius concluded.