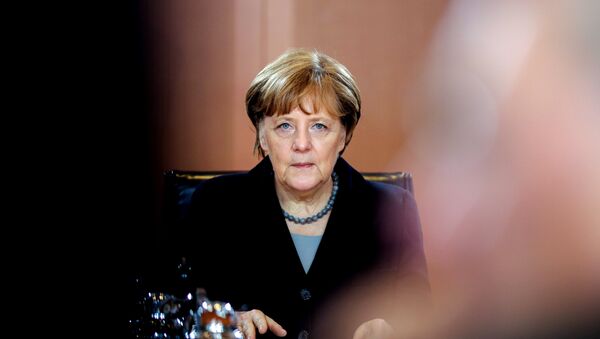 The economic crisis in Greece had been predicted to break up the European Union, but German Chancellor Angela Merkel stood firm and steered the country out of bankruptcy and back under Brussels' control. Soon after, the migration crisis began - with unprecedented numbers of refugees arriving on European shores on a daily basis.

Cracks in Europe's union appeared as opinions and policies towards the refugee crisis among EU member states widened. Many countries decided to shut their borders — turning their back on both the asylum seekers — and the founding policies of the EU. Chancellor Merkel on the other hand, agreed to open Germany's borders to a limitless number of Syrian refugees. 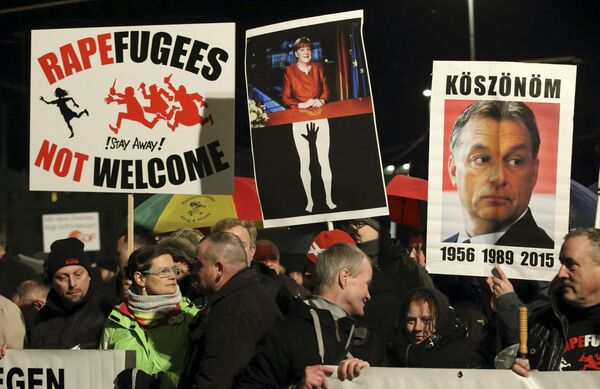 Members of LEGIDA, the Leipzig arm of the anti-Islam movement Patriotic Europeans Against the Islamisation of the West (PEGIDA), take part in a rally in Leipzig, Germany January 11, 2016.
© REUTERS / Fabrizio Bensch

And now Merkel faces a new crisis after New Year's Eve celebrations in Germany turned sour. More than 650 women have filed criminal complaints after being attacked and sexually assaulted by men. Many of the suspects involved in the sexual assaults on December 31st are believed to be asylum seekers — men of North African and Middle Eastern descent.

More than 1.1 million refugees sought asylum in Germany in 2015. Merkel, once praised for her humanitarian response to the crisis now faces criticism from many EU countries and their leaders, including her own political party — the Christian Democratic Union (CDU).

Merkel is now under pressure to change her open-door policy.

EU's Martin Schulz: Europe's Resilience, Stability 'Reaching Its Limits'
More than 40 politicians from her CDU party have reportedly signed a petition calling for Germany to close its borders to refugees and asylum seekers.

The petition states that the borders should be closed to asylum seekers "who wish to enter Germany illegally via a safe third country."

According to London newspaper the Financial Times, rebels in Merkel's party are planning on calling a vote on the controversial proposal to close the country's borders at the next party meeting on January 26.

"If so many of our party speak out in favor of partial refusal at the border, we should all be able to vote on it," MP Christian von Stettan told German newspaper, Bild.

Angela Merkel had recently reassured her party that the open door policy for refugees was a temporary measure. However since the sex assaults in Cologne on New Year's Eve, she is under pressure to find a more permanent solution — or face a rebellion.