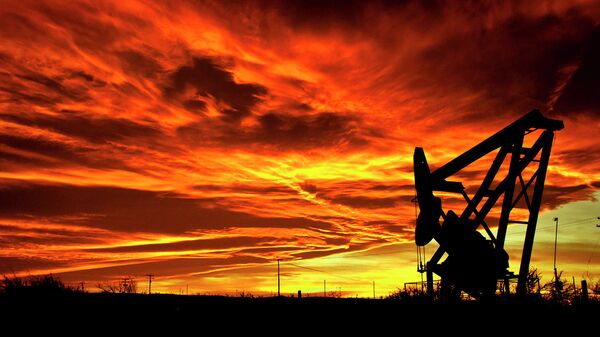 Plummeting oil prices may challenge the established geopolitical status-quo and even result in war and turmoil, experts warn. Will the petroleum-centric world of the past half-century be restored again soon?

The current slump in oil prices has affected giant oil corporations and the ancillary businesses; it also threatens to undermine economies of major energy-producing countries resulting in a "profound shake up" in the political order, according to Michael T. Klare, a Professor of peace and world security studies at Hampshire College (Massachusetts, United States).

The American academic feels that the continuing depression in oil prices may stretch into the 2020s and beyond.

"Generally speaking, oil prices go up when the global economy is robust, world demand is rising, suppliers are pumping at maximum levels, and little stored or surplus capacity is on hand. They tend to fall when, as now, the global economy is stagnant or slipping, energy demand is tepid, key suppliers fail to rein in production in consonance with falling demand, surplus oil builds up, and future supplies appear assured," the American academic explains in his article for TomDispatch.com.

Economic Uncertainty: 'Crude Oil Prices May Fall to $20'
Klare refers to the temporary economic slowdown in China, the surge of oil output in North America (up to 9.2 million barrels per day), and most notably to Saudi Arabia's "steadfast resistance" to decrease its own production or that of the Organization of the Petroleum Exporting Countries (OPEC).

What lies beneath the Saudis' refusal to curtail their oil output? Riyadh is possibly determined to punish Russia and Iran for its support of Syria, the US academic notes. On the other hand, Saudi Arabia is apparently making attempts to drive US shale producers out of the oil market.

To add more fuel to the fire, Iraq and Iran continue to increase their output as well. As Daesh (Islamic State/ISIL) is losing ground in Syria and Iraq, Baghdad's oil production is expected to continue its growth, Klare remarks.

As for Iran, its nuclear deal with Washington has opened doors for Tehran's re-entering the oil market. According to US Energy Information Administration forecast released in August 2015, "Iran has the technical capability to increase crude oil production by about 600,000 b/d by the end of 2016."

"Only three developments could conceivably alter the present low-price environment for oil: a Middle Eastern war that took out one or more of the major energy suppliers; a Saudi decision to constrain production in order to boost prices; or an unexpected global surge in demand," Klare believes.

Iran-Saudi Cold Spell: Is Riyadh Trying to Bite Off More Than It Can Chew?
American columnist James Stafford of Oilprice.com echoes Klare's assumption: according to Stafford, direct military confrontation between Saudi Arabia and its longstanding regional rival, Iran, could put oil back into "triple-digit territory" reaching up to $250 per barrel.

"A war between the two countries could lead to supply disruptions, with predictable impacts on prices," he notes, citing Dr. Hossein Askari, a professor at The George Washington University.

However, Klare and Stafford agree that although it is not impossible at this point the war between Saudi Arabia and Iran is a "speculative" issue.

Klare adds that neither Saudi Arabia's decision to curtail its output nor a sudden spike in demand appears likely anytime soon.

Indeed, according to the International Monetary Fund (IMF), growth rates of emerging and developing economies, which account for almost 60 percent of global GDP and 85 percent of the world's population, are now down.

"Not only have oil and metals prices fallen by around two-thirds from their most recent peak, but supply and demand side factors suggest that they are likely to stay low for a sustained period," IMF Managing Director Christine Lagarde said at symposium in Paris on January 12, 2016.

Russia 'Has Not Taken Full Advantage' of Ruble’s Collapse
The more likely outcome of the slump, however, is a wave of unrest in oil-producing countries, Klare suggests. The American professor assumes that Nigeria, Venezuela, Algeria and Angola face the prospect of political turmoil.

Although Saudi Arabia, one of the world's leading producers, has survived the initial shock due to its huge foreign reserves, Riyadh has already announced cutbacks in public spending prompting growing discontent among the population of the Gulf kingdom.

In contrast, the Russian establishment is doing well with the Kremlin enjoying widespread popular support. Despite the slump in oil prices Russia's leadership "has indeed been moving ambitiously on the international front," Klare notes.

"Whatever happens to oil and the countries that produce it, the global political order that once rested on oil's soaring price is doomed," the American academic suggests.