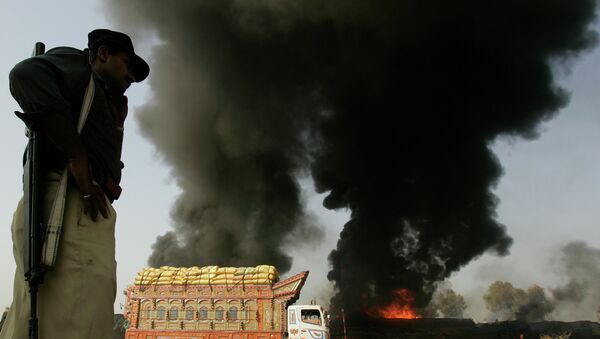 © AP Photo / Aaron Favila
Subscribe
Pakistan and Afghanistan may become safe havens for new terrorist networks. This forecast was made by US President Barack Obama, speaking during his State of the Union address to Congress.

The US administration has expressed dissatisfaction with Islamabad in its fight against jihadism and Islamic radicalism. However Pakistan itself has been the subject of numerous terrorist attacks and the country has continued conducting large-scale military operations against Islamic militants on the border with Afghanistan.

Daesh Militants Attack Office of Pakistani News Channel, Injure Staffer
Pakistan’s Operation Zarb-e-Azb is a joint military offensive being conducted by the Pakistan Armed Forces against various militant groups. Up to 30,000 Pakistani soldiers are involved in Zarb-e-Azb operation which aims at eradicating militants and improving general security situation in the country.

According to a leading expert of the Institute of World Economy and International Relations of the Russian Academy Sciences (IMEMO) Vladimir Sotnikov said that Pakistan would have eliminated terrorism completely if it could.

“In fact, today, Pakistan is in dire state. With the advent of the Daesh militants in Afghanistan, the situation becomes even more acute. The government in Kabul has no control over what is happening in the north. Militants keep penetrating into Pakistan via Afghanistan and no matter what the army does, the task to eliminate the terrorists is difficult to accomplish for Pakistan,” Sotnikov said.

In reality, Pakistan is growing discontent and feels distrust towards the United States. Washington, promised to assist in the fight against terrorism, providing military-technical and financial assistance but so far it hasn’t kept its promise.

US State Department Issues Terror Attack Warning for Pakistani Capital
According to the expert a very significant moment was the scandal for the supply of eight US F-16 fighters to Pakistan. Pakistan has long since fully paid for this military order, but the jet fighters have not been received.

“It is not surprising that Pakistanis are feeling that the US constantly betrays its allies and does not give Pakistan a chance to develop. Especially in light of the fact that the US aid is linked to its need for military presence in the region,” Sotnikov noted.

The Americans have repeatedly requested the Pakistani government in the past for permission to place US troops, primarily Special Forces on Pakistani soil but it is a violation of the sovereignty of Pakistan, the expert mentioned.

Washington's relation with Pakistan as a rogue power, who allegedly does not want to defeat radical Islamism, according to the Russian expert, gives rise to a natural question. “Does the United States seek to effectively deal with jihadism and radical Islam? Or does it simply use slogans of struggle against terrorism threat as an excuse to consolidate and expand its military presence in the Middle East and South Asia?” concluded the expert.