Istanbul Blast: Is It Only Beginning? 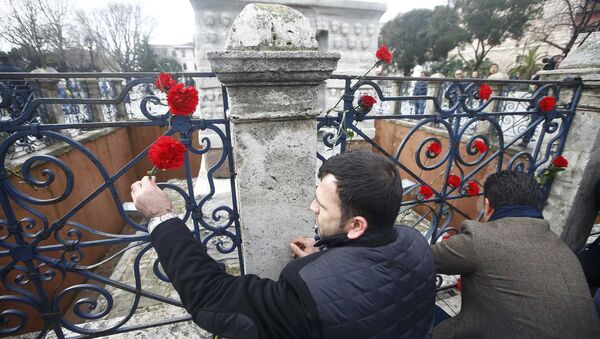 © REUTERS / Osman Orsal
Subscribe
International
India
Africa
The bomb that killed 10 people and injured 15 others in Istanbul on Tuesday was set off by a suicide bomber from Syria, Turkish President Recep Tayyip Erdogan said on Wednesday. He added that Turkey was a prime target for terrorist groups active in the region.

Number of Germans Killed in Istanbul Attack Rises to 10
Metin Gurcan, a Turkish political scientist and counterterrorism expert, warned that Tuesday’s blast was just the beginning and there could be more to follow.

“I think that after Tuesday’s attack in Istanbul the international coalition will step up its campaign against Daesh. The explosion on Sultanahmet square is only the beginning and there will be more and more such terrorist attacks coming our way,” he told Radio Sputnik.

The powerful explosion tore through a crowd of visitors gathered outside the Blue Mosque in the Sultanahmet district in the city’s historical center. Most of those killed were foreign tourists.

Briefing reporters after an emergency security meeting in Ankara Vice-Premier Numan Kurtulmus said that the suicide bomber had been identified as a 33-year-old man from Syria.

Metin Gurcan warned that the scope of Daesh and related groups’ activities in Turkey should not be underestimated “if we want to avoid the most tragic and unpredictable consequences of what happened in Istanbul.”

He said that Germany was the prime target of Tuesday’s attack, arguing that it could have come in response to Berlin’s decision to increase their involvement in the ongoing anti-Daesh campaign in Syria.

“Turkey needs to be in the forefront of the war on terror, otherwise it will have to pay a heavy price, which was so clearly demonstrated by yesterday’s blast in Istanbul,” Metin Gurcan warned.

Meanwhile, the Turkish authorities have imposed a temporary ban on the media coverage of Tuesday’s blast, which they believe could hamper the ongoing investigation and inflame the public.

Igor Nikolaichuk, a Moscow-based expert on regional security, said the measure had been prompted by a serious political confrontation in Turkey.

“What the Turks have in their country is a fairly authoritarian regime that can impose a sort of a gag order on the media during such events where all related information is censored in order not to rouse mutual suspicion and a direct showdown between those who support Erdogan and those who don’t,” Nikolaichuk told Radio Sputnik.

Turkish security officials are not ruling out that Daesh could have had a hand in Tuesday’s explosion.

The Syrian suicide bomber could have belonged to Daesh-allied groups, but I don’t think that Daesh is so keen on staging such attacks in Turkey because they have close ties with Turkish leadership. Pro-Ankara terrorist groups unrelated to Daesh are the backbone of the anti-Assad rebellion in Syria.

What is really going on now is a destabilization of the entire Middle East and it’s a pity that Turkey finds itself at the edge of this destabilization.

Therefore, Tuesday’s terrorist attack could have had many shades and staged by a plethora of different groups, Igor Nikolaichuk said.

“If it turned out that the Istanbul bomb was set off by a Daesh member, then it will mean that the Turks have reaped what they sowed by helping the terrorists who eventually responded by hitting Istanbul, the country’s show-window, its main tourist hub and shopping center,” Igor Nikolaichuk noted.

Anatoly el-Murid, another Moscow-based political analyst said that he could not point a finger at any specific group.

“There are many people in Turkey willing to stage a terrorist attack these days. When you have a country just across the border where a civil war has been raging for almost four years now, when you have armed gangs roaming the streets, you just can’t control them. Still, I believe thatTuesday’s attack could have been the work of either Daesh or young Kurdish radicals who accuse their elder comrades of collaborating with Turkey. They are fighting their own war against Turkey, Anatoly el-Murid said.

“The main goal of these terrorist attacks is to sow panic, rather than kill as many people as you possible can. That’s why it really does not matter exactly how many people die in these attacks,” he added.