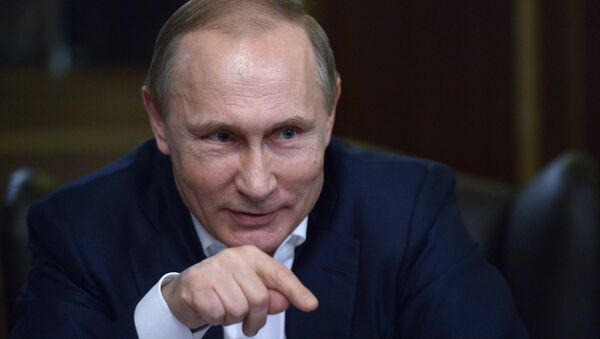 In a recent interview with the German newspaper BILD Russian President Vladimir Putin talked about the relations between the West and Russia, economic sanctions and international crises. His interview attracted global attention, with major media sources commenting on the issue.

For instance, the German newspaper Die Zeit perceived Putin's statements as a sharp criticism towards the West.

"The sanctions of the West are designed not to help Ukraine, but push Russia back geopolitically. They are foolish and harm both sides," the Russian President said during the interview, calling Western sanctions "a theater of absurd."

Putin: Russia Coordinates Moves in Syria With Both Assad's Army, Opposition
Citing this statement, Frankfurter Allgemeine Zeitung wrote in its article that it does not see any reconciliation tendencies in West-Russia relations.

However, the Russian business newspaper Vedomosti on the contrary viewed the interview as Putin's attempt to approach the West, while US magazine Wall Street Online praised Putin's positive comment about German Chancellor Angela Merkel whom he called "a very open person."

During the interview, Putin mentioned that he trusts German Chancellor Angela Merkel, who, in his opinion, is actually struggling to resolve the current crisis.

Deutsche Welle and the Swiss newspaper Neue Zürcher Zeitung stressed in their reports that Vladimir Putin is continuing his cooperation with Syrian President Bashar-al-Assad.

"Russian President Vladimir Putin continues to view Syrian President Bashar al-Assad as a legitimate ruler of his country. However, he demanded a swift constitutional reform and elections in Syria, once the situation in country is stabilized," Neue Zürcher Zeitung wrote.

The British newspaper The Guardian also found it noteworthy that the Russian President is continuing to support the Syrian leader. The media source interpreted Putin's statement as a hint that Russia could grant asylum to the Syrian President if he is forced to leave Syria.

"It was surely more difficult to grant Snowden asylum in Russia than it would be in the case of Assad," the newspaper quoted Vladimir Putin as saying.

The newspaper also cited Putin's statement about the external factors triggering the conflict in the Middle East. The Russian President said that "the conflict would never have become so big if it had not been fuelled by outside of Syria — with weapons, money and fighters."