Russians Detained in Antalya Suspected of Logistical Assistance to Daesh 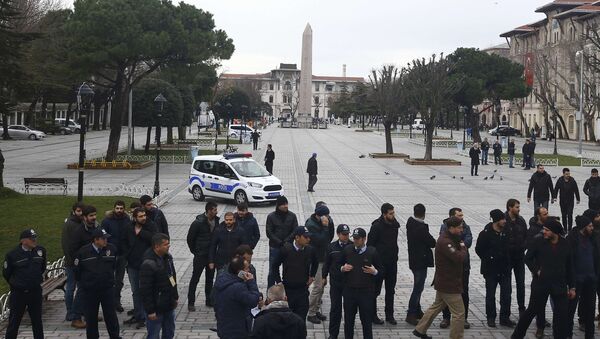 Three Russian nationals detained in the Turkish city of Antalya are believed to have been providing logistical assistance to Daesh terrorist group, local media reported Wednesday.

Three Russians Detained in Antalya Following Istanbul Blast
MOSCOW (Sputnik) — Earlier in the day, the Russian Consulate in Antalya confirmed media reports that three Russians had been detained after an explosion in Istanbul’s historical center the day before claimed the lives of at least 10 people and injured at least 15 others.

According to the Turkish Anadolu news agency, police found documents belonging to the detained, proving that they provided logistical support to Daesh.

On Tuesday, a blast went off near a tram stop full of vacationers in the Sultanahmet district of Istanbul, which is popular with tourists.

The explosion in the central square in Istanbul’s historical center on Tuesday morning claimed the lives of at least 10 foreign tourists and injured 15 people. The attack was perpetrated by a Syrian suicide bomber, according to the Turkish leader.