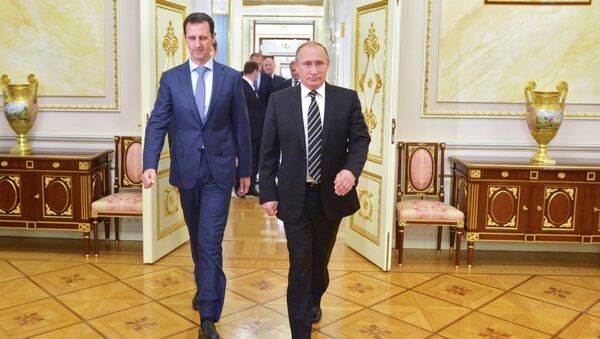 US House of Representatives Homeland Security Committee Chairman Michael McCaul stated that Russia could work with Syrian President Bashar Assad to bring about resolution of Syria’s crisis and counter Daesh operating in Syria and Iraq.

"It's a civil war in Syria and Assad has to be part of the solution as well, he's a magnet," McCaul said on Wednesday. "I think the Russians could actually play a constructive role with Mr. Assad."

McCaul warned of simplistic notions of destroying the Islamic State that entails "that you push a button or you carpet a bomb."

He added there is a military aspect to the situation in Syria that is critical, but also there is a political piece to it as well.

McCaul commented that President Barack Obama has failed to prevent Daesh from growing over the course of his presidency.

"I think the president [Obama] has learned… [to] disregard and ignore what is supposed to happen under his watch, it was supposed to all be over, the reality is the Islamic State reared its ugly head and you can’t turn a blind eye to it, you can’t pretend it doesn’t exist."

In 2014, the US-led coalition launched an airstrike campaign against Daesh in Iraq and later in Syria. Last September, Russia began carrying out its own air campaign against the terrorist group in Syria at the request of President Assad.