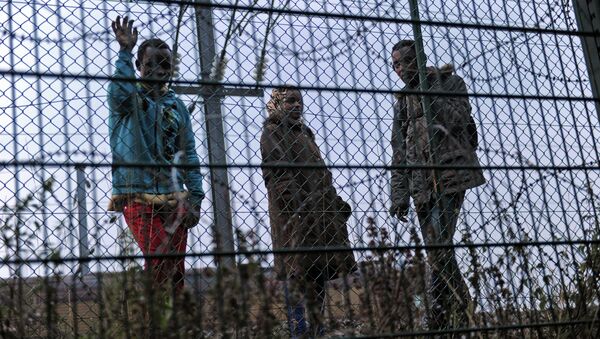 © AFP 2023 / FRANCOIS LO PRESTI
Subscribe
International
India
Africa
Eurotunnel announced that in order to prevent migrants from crossing into the United Kingdom the company let the water flood the area surrounding its terminal.

MOSCOW (Sputnik) – The operator of the Channel Tunnel between England and France, Eurotunnel, has intentionally flooded the area close to its terminal to prevent refugees from crossing into the United Kingdom, Eurotunnel spokesman John Keefe said Wednesday.

"We have let the water level rise and used this to form a network of barriers to stop people from getting to the fences — a way of using the natural environment as a layer of protection," Keefe said in an interview with The Local news outlet.

Germany to Deport More Migrants Amid Cologne Sex Assaults
He added that in September 2015, the company cleared over 100 hectares of the area of plants and trees in an effort to enhance security and prevent migrants from hiding from police.

In December 2015, around 1,000 asylum seekers tried to storm the Channel Tunnel near the French port city of Calais in an attempt to reach the United Kingdom.