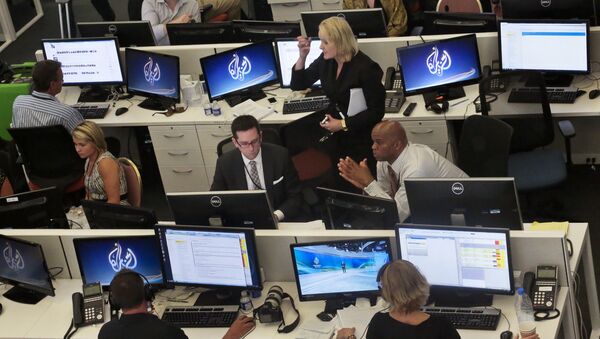 After less than three years of operation, Al Jazeera America is shutting its doors, laying off hundreds of employees in the process.

On Wednesday, rumors began circulating that a scheduled all-staff meeting at Al Jazeera America (AJAM) was an indication that the cable news outlet was struggling. In the aftermath of that meeting, that speculation has been confirmed.

According to Politico, the AJAM leadership informed staffers that the channel’s business model was "no longer sustainable," and that it will shut down by April 30.

"I know this will be a massive disappointment for everyone here who has worked tirelessly for our long-term future. The decision that has been made is in no way because AJAM has done anything but a great job," reads a company email from CEO Al Anstey, obtained by Politico.

"Our audiences continue to climb. Slowly, but steadily. Our editorial excellence was demonstrated time and time again on the major stories of recent months. And we continue to win praise from our colleagues in the industry, and from our viewers for the quality of our output."

The network struggled with internal strife from the beginning as well. Staffers frequently voiced concerns that AJAM was too focused on avoiding political bias, favoring dry content that couldn’t compete with the political favoritism of mainstream US media outlets like MSNBC or Fox News.

This early even-handed approach was meant to rebrand Al Jazeera, which had been dubbed “terrorist propaganda” by the Bush administration, due to its comprehensive and critical coverage of the Iraq War.

"While it has a foreign name, the forthcoming Al Jazeera cable channel in the United States wants to be American through and through," reads a New York Times article from 2013.

AJAM has also been plagued by a series of lawsuits. In June, former senior vice president Shannon High-Bassalik sued the company for "unlawful and discriminatory" treatment of employees, alleging that executives "favored its Arabic and male employees, treating its non-Arabic female employees as second class citizens."

The purchase of Current TV led to a protracted lawsuit between AJAM and Al Gore.

Falling crude prices are also thought to have a hand in the move. With the price of oil dipping below $30 a barrel, the Qatari government, which owns the Al Jazeera Media Group, may be seen to be making tough financial choices.

The announcement does not affect Al Jazeera English, which will continue to operate out of Doha.

According to Politico, employees who remain with the company through a 90-day grace period will receive retention bonuses, as well as eight weeks of severance pay and outplacement services.