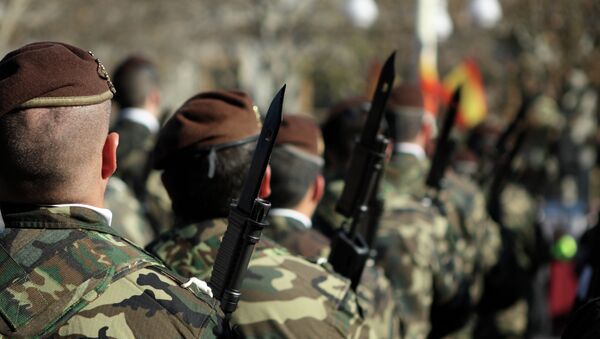 Due to substantial human and financial losses inflicted on Daesh (ISIL/Islamic State) by the Russo-Syrian advance and Western airstrikes, Islamists are fleeing to oil rich Libya. Will 2016 bring a new NATO-led military intervention to the North African state?

A report released by the United Nations in early December 2015 warned about Daesh beefing up its military presence in Libya; indeed, the northern African state is strategically important to Islamists due to its geographical location at the crossroads between the Middle East, Africa and Europe.

The report cited Abu al-Mughirah Al Qahtani, the so-called "delegate leader" of Daesh's Libyan Wilayat, who said that "Libya has a great importance because it is in Africa and south of Europe. It also contains a well of resources that cannot dry. […] It is also a gate to the African desert stretching to a number of African countries."

Britain Reportedly Uses Brimstone Missiles Against Daesh in Syria
"Daesh in Libya" was formed by Libyan returnees from Syria in spring of 2014 under the banner of the Islamic Youth Shura Council (IYSC) in Derna. The organization vowed alliance to Daesh in October 2014 and declared eastern Libya to be Daesh's Wilayat Barqa (the Cyrenaica Province).

"In 2014, ISIL announced three provinces in Libya, namely, Wilayat Tripolitania (including Tripoli and Sirte), Wilayat Barqa (Cyrenaica, including Derna and Benghazi) and Wilayat Fezzan (south)," according to the UN analysts.

They added, however, that this division does not mean the notorious Islamist group has maintained control over these territories, but rather demonstrates Daesh's aspirational vision of its presence in Libya.

The decision by Islamist fighters to create a stronghold in Libya is hardly surprising, since the group has suffered tremendous losses since the beginning of the Russo-Syrian advance in Syria.

"The Islamic State [Daesh] leadership is seeking ways to compensate for the financial losses it has suffered, and establish new backup outposts outside the Middle East. That is why ISIL has been fairly active in plans to take control of Libya, which is particularly rich in 'black gold,' as well as Afghanistan, with is home to a profitable narcotics market," Czech-based freelance journalist and analyst Martin Berger writes in his piece for New Eastern Outlook.

About 50 Daesh Militants Killed in Past 24 Hours in Afghanistan
As for Daesh's actions in Afghanistan, the Pentagon's December report indicated clearly that the terrorist organization "has progressed from its initial exploratory phase to a point where they are openly fighting the Taliban for the establishment of a safe haven, and are becoming more operationally active."

The terrorist organization has seized more than 240 kilometer of Libyan coastline. The number of Daesh militants in the area amounts to 5,000.

According to Berger, Daesh's primary objective in Libya is to establish its control over the country's oil exports. The only way to achieve this ambitious goal is to seize Libya's major ports and maintain control over strategically important roads.

Besides the illicit oil trade, Daesh could make huge profits in arms smuggling in Libya: the destruction of the state in 2011 following the NATO intervention has resulted in uncontrolled weapons' supplies within the Libyan borders and beyond.

"As for the access of ISIL [Daesh] to the banking operations, this problem is greatly simplified for them in Libya in the context of the ongoing dual power in the country: on the one hand — there is the elected parliament, sitting in the city of Tobruk, on the other — pro-Islamic universal national congress, sitting in Tripoli," Berger notes.

Alain Barluet, a correspondent for France's Le Figaro, reported in late December that France is considering a plan for intervention in Libya to eradicate "the cancer of Daesh" as well as its metastases. Citing the French Defense Ministry the journalist pointed out that a six-month military operation would possibly be launched against Daesh in Libya before spring.

Furthermore, in the beginning of January 2016 Chris Hughes of the Daily Mirror reported that the British Special Air Service (SAS) have been deployed in Libya waiting for the arrival of almost 1,000 British military personnel. The journalist added that the upcoming military operation would bring together about 6,000 American and European soldiers, including Italian, British and French forces.

The question remains open as to whether 2016 will bring another all-out NATO-led military invasion of the North African state and what fruit the new war would bear.