US Oil Production to Decrease Across Major Shale Regions 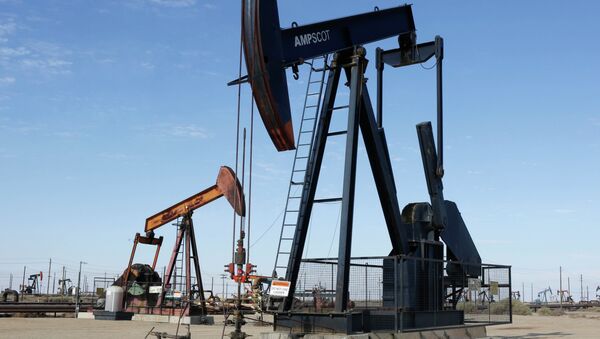 © AP Photo / Rich Pedroncelli
Subscribe
International
India
Africa
Shale oil production in the seven largest US oil and gas producing regions is due to decline in February compared to January by 116,000 barrels per day, according to the US Energy Information Administration's (EIA) report.

Oil Companies Putting US Environment ‘On Shaky Ground’ With Fracking
MOSCOW (Sputnik) – In December, the EIA predicted a decline of 116,000 barrels per day for shale oil production at the key US oilfields.

The projected decline will not affect two regions out of seven, namely Permian and Utica. The largest decline is expected in the Eagle Ford field in Texas, where oil production is likely to decrease by 72,000 barrels per day.

Projected decline at Bakken and Niobrara oil fields are due to stand at 24,000 and 23,000 barrels per day, respectively.

Besides, the EIA forecast the reduction of gas production at the same fields would reach 405 million cubic feet (almost 11,500 cubic meters).

EIA oil production forecasts are based on the number of drilling rigs in every oil and gas sector, according to the Baker Hughes oil and gas service company.