Shutting Off the Tap: South Stream Project Dead, Despite Expectations 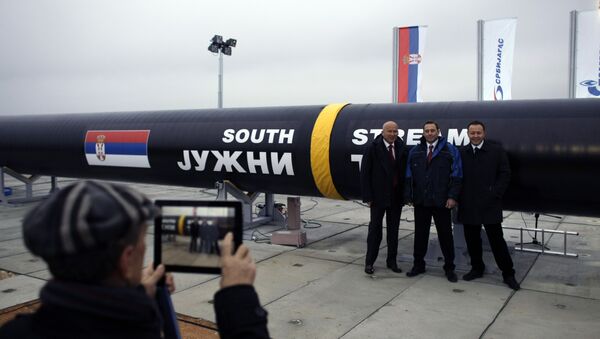 Bulgaria Yet Unaware of South Stream Talks Renewal With Russia
Russia is not going to resume negotiations on the construction of the South Stream gas pipeline, according to Vladimir Putin's Press Secretary Dmitry Peskov.

"At present, such a project does not exist. It has been terminated. Consequently, there is no subject for negotiations," Peskov said.

The statement came shortly after the Bulgarian newspaper Standart quoted sources in the Bulgarian government as saying that work on the South Stream project may be resumed in a few weeks.

#Putin: "#Bulgaria would have gained a lot of money with South Stream, impossible to understand why they decided to block the project"

Earlier, the press service of the Bulgarian Council of Ministers reported that Bulgarian authorities do not have information on possible renewal of talks with Russia on the construction of the South Stream gas pipeline.

In late 2014, Moscow announced the cancellation of the South Stream gas pipeline, which had been intended to traverse the Black Sea to deliver Russian natural gas through Bulgaria, Serbia, Hungary and Slovenia to Italy and Austria.

Putin Says No Chance of Reviving South Stream Project
Moscow referred to what it described as the unconstructive position of the European Commission, which has repeatedly said that the South Stream project does not comply with the EU's Third Energy Package, which bans gas producers from owning pipeline infrastructure.

Following the cancellation, Russia announced plans for the Turkish Stream gas pipeline to replace South Stream. However, Turkish Stream was suspended in late 2015 amid the deterioration of Moscow-Ankara relations after Turkey downed a Russian Su-24 jet in November for allegedly violating its airspace. Moscow has dismissed the allegations, stressing that the jet was shot down over Syria.