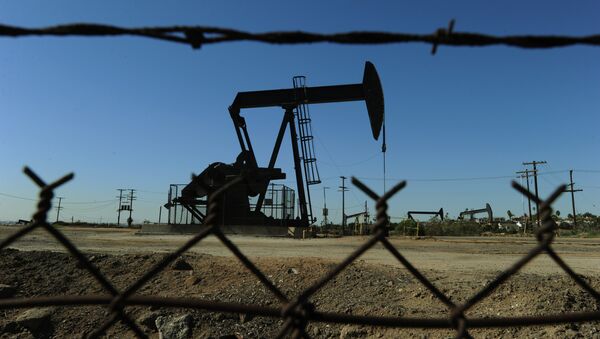 "Based on financial factors, the bottom is several dollars up or down in the current range of $32 per barrel. However, given the escalating geopolitical unrest in the Middle East, should war erupt and social unrest intensify in the ongoing Sunni/Shia conflicts which expands far beyond the Iranian/Saudi Arabia standoff, oil could spike well above $60 a barrel," Trends Research Institute head Gerald Celente stressed.

Third of US Oil Companies May Go Bankrupt in 2017 Amid Low Crude Prices
Unless any major development takes place, it is likely that oil could go to $20 a barrel, he added, explaining that there was too much supply and insufficient demand.

Another expert, a peace and world security studies professor at Hampshire College, pointed at the lack of solidarity among the petroleum exporting countries that led to a dramatic drop in prices.

"One [factor] is the collapse of supplier solidarity, which in the past led to common efforts [mostly via OPEC] to rein in production in order to boost prices. But in the absence of such solidarity, each supplier is now trying to retain market share no matter how low prices go, flooding the market with crude," Michael Klare told Sputnik.

Another cause of oil prices decline is a growing concern over climate change and pollution, and efforts by governments and citizens to curb fossil fuel consumption, he specified.

How Saudi Arabia Wants to Privatize Its Oil But Keep the Profits
The only event that might suddenly bolster prices is a sort of a direct military clash between Iran and Saudi Arabia following the January execution of a Shiite cleric Nimr al-Nimr, endangering the flow of oil through the Strait of Hormuz, Klare concluded, however, such a scenario seemed to him highly unlikely as both sides would suffer enormously.

Earlier on Monday, the Organization of the Petroleum Exporting Countries (OPEC) stated that its Reference Basket of petroleum blends fell in value by 4.88 percent, reaching the same level as October 1, 2003, or $27.07 per barrel.

Recent turbulence in the Chinese stock market has caused a knock-on effect across the world. China's trade suspension last week was followed by Wall Street sliding one percent and European stock markets slumping by two percent.