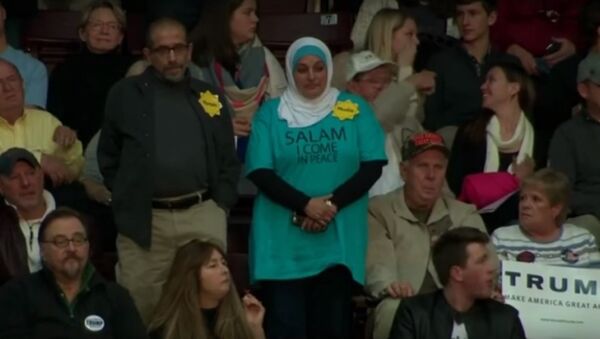 A Muslim woman and a Jewish man who attended a rally for Republican presidential candidate Donald Trump as a form of silent protest, were forcibly removed from the event as the candidate’s right-wing supporters shouted racial slurs at the woman.

Rose Hamid, 56, attended the rally at Winthrop University in Rock Hill on Friday evening wearing a shirt that says “Salam, I come in peace,” along with a yellow star referencing the patches that Jewish people were forced to wear during the Holocaust. With Hamid was Marty Rosenbluth, a Jewish immigration lawyer, who also wore a star.

Hamid was one of a small group of silent protesters wearing the stars, which had “Muslim” and “Stop Islamophobia” written on them in reference to discrimination by Trump’s calls for database of adherents to the Muslim religion and his calls to stop the  immigration of those follow the widely popular religion.

Trump’s comments have been condemned by a majority of politicians across party lines as being discriminatory and unconstitutional.

During his speech, the candidate insinuated that all Syrian refugees are loyal to the terror-group Daesh. At that moment in the speech Hamid and other peaceful protesters quietly stood up.

As soon as they did, the protesters were met with shouts by the crowd and chants of “Trump, Trump, Trump,” following the real estate mogul’s previous instructions to his followers as a “protester alert system.”

The demonstrators, including Hamid, were then forcibly removed from the crowd by Trump’s security as the reality show host’s fans shouted Islamophobic slurs including, “you have a bomb?!”

"There is hatred against us that is unbelievable," Trump said as the peaceful and unresisting protesters were hauled off.

CAIR, the Council on American-Islamic Relations issued a statement regarding Trump’s demagoguery, requesting an apology from the former television star.

"The image of a Muslim woman being abused and ejected from a political rally sends a chilling message to American Muslims and to all those who value our nation's traditions of religious diversity and civic participation," CAIR national executive director Nihad Awad in a statement.

"Donald Trump should issue a public apology to the Muslim woman kicked out of his rally," Awad continued, "and make a clear statement that American Muslims are welcome as fellow citizens and as participants in the nation's political process."

The day after the event, State Representative John King announced he would be introducing a resolution declaring Trump no longer allowed in the state.

King told the Herald that he was “sick to his stomach” over Trump’s treatment of the woman and called for bipartisan support of the resolution.

“Donald Trump is a race-baiting, xenophobic bigot and is not welcome in the state of South Carolina,” the proposed resolution began.

“Democrats and Republicans don’t agree on much in South Carolina, but most of us agree that Donald Trump is an embarrassment to our country’s political process and stands contrary to the beliefs of our Founding Fathers and the values of the United States Constitution,” King’s statement explained. “Why would we welcome someone to our great state when even our senior Republican U.S. senator agrees that Donald Trump is nothing more than a modern day George Wallace who preys on people’s fears and prejudices.”

“It’s time to stand up to this big mouthed bigot once and for all by announcing that he is no longer welcome in the Palmetto State,” King added.