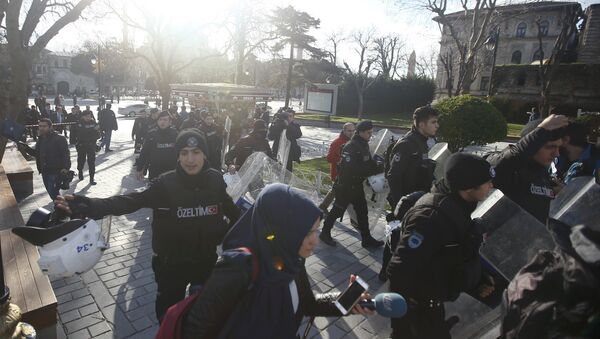 © REUTERS / OsmanOrsal
Subscribe
International
India
Africa
Federica Mogherini said that European Union expresses its condolences to the families of the victims of the Tuesday explosion in Istanbul.

Germany Issues Travel Warning After Istanbul Explosion
BRUSSELS (Sputnik) – The European Union expresses its condolences to the families of the victims of the Tuesday explosion in Istanbul, EU foreign policy chief Federica Mogherini and European Neighbourhood Policy Commissioner Johannes Hahn said in a statement, reaffirming the EU-Turkey efforts in the fight against terrorism.

"The EU extends sincere condolences to the families of the victims killed in the bomb attack today and wishes a speedy recovery to those injured," the statement read.

The counterterror fight was outlined as a priority at a November EU-Turkey summit, the officials wrote.

"We must step up our efforts in this regard in full respect of our obligations under international law, including human rights and humanitarian law," they added.

Earlier in the day, an explosion occurred in the central square in Istanbul’s historical center, leaving at least 10 people dead and 15 injured.

Turkish President Recep Tayyip Erdogan called the explosion a terrorist act which was carried out by a Syrian suicide bomber.