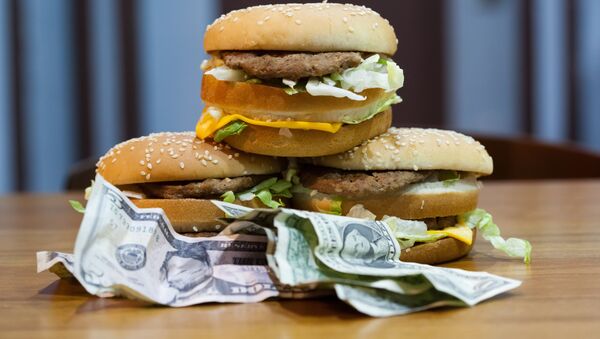 According to the latest Economist 'Big Mac Index' currency comparison of McDonald's Big Mac prices across the world, the Russian ruble and Venezuelan bolivar are the most undervalued, and the Swiss franc is the most overvalued currency.

Russian Economy to Grow by 1.3% in 2017 - World Bank
A comparison of Big Mac prices across the world by The Economist magazine has found the Russian ruble to be the world's second most undervalued currency, exceeded only by the Venezuelan bolivar.

While a Big Mac in the US in January 2016 costs $4.93, in Russia it is priced at 114 rubles, the equivalent of $1.53 according to the current exchange rate of 77.66 rubles for one dollar. The Big Mac price indicates that this exchange rate undervalues the ruble by 69 percent, and that one dollar should be worth 23.12 rubles.

In Venezuela, a Big Mac costs 132 bolivars, the equivalent of $0.66 cents at the current rate of 198.70 bolivars for one dollar. The Big Mac price indicates shows that the bolivar is undervalued by $86.5 percent, and implies an exchange rate of 26.77 bolivars.

The Ukrainian hryvnia was the third most undervalued currency, because a Big Mac in Ukraine costs 36 hryvnia, the equivalent of $1.54 at the current exchange rate of 23.35 hryvnia for one dollar.

​The index shows that Switzerland has the most overvalued currency, despite the drop in its value relative to the dollar over the past year. One Big Mac there costs 6.50 Swiss francs, the equivalent of $6.44. While one dollar currently buys 1.01 Swiss francs according to the exchange rate quoted by the magazine, the Big Mac rate implies it should buy 1.32 Swiss francs.

​Because of the strength of the dollar, just three currencies were overvalued in relation to the greenback; in Sweden a Big Mac costs 45 Swedish krona, or $5.23, and in third-placed Norway it costs 46.80 kronor, or $5.21. In all the other countries surveyed, hungry US tourists would get more burger for their buck than back home.

Russian Economy to Grow by 1.3% in 2017 - World Bank
The Big Mac index began in 1986 as a way of testing whether currencies are at their correct level, according to their purchasing-power parity (PPP), an economic theory which holds that exchange rates should be moving towards eventual global price parity in the future. In that ideal case, an identical basket of goods and services will be the same in any two countries.

The Economist also provides what it calls a "gourmet" version of the index, which also takes into account GDP. "PPP signals where exchange rates should be heading in the long run, as a country like China gets richer, but it says little about today's equilibrium rate," the magazine explains.

According to that index, the Russian ruble is still undervalued, this time by 52 percent rather than by 69 percent as in the raw index.