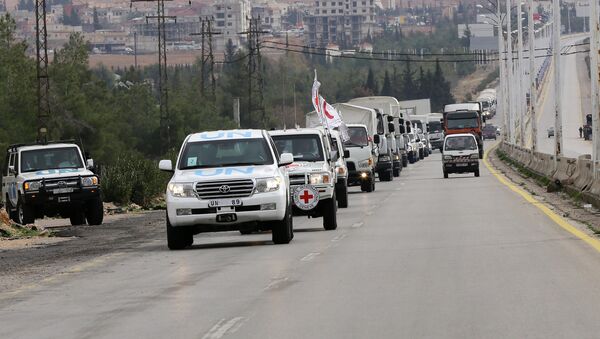 Finian Cunningham
All materials
The Western news media are at it again – telling barefaced lies and half-truths about starving towns in Syria being liberated from sieges. Fake images of emaciated children are also being published to shore up their fraudulent narrative.

Helping Hand: UN Humanitarian Convoys Deliver Aid to Besieged Syrian Cities
Take the image of the malnourished little girl whom the BBC and the British Independent newspaper claimed was from the Syrian town of Madaya. Turns out the girl is from south Lebanon. Her name is Marianna Mazeh. The photo published widely this week by Western media is from three years ago, yet the same media are claiming that she is one of the residents of the Syrian town of Madaya, which the Western media also say is being blockaded by the governments forces of President Bashar al-Assad.

Turns out too that Marianna's family are infuriated that her forlorn image is being circulated for propaganda purposes. "I live in Tayr Filsey [south Lebanon], not Madaya, and I am fine," the little girl told Al Manar news agency. She is now aged seven and apparently has made a full recovery from her earlier emaciated condition. The reason for her previous illness is not clear. 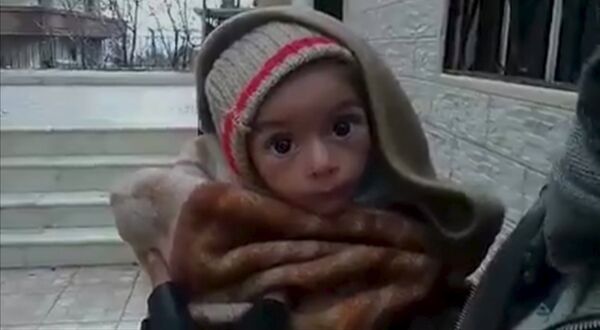 A toddler is held up to the camera in this still image taken from video said to be shot in Madaya on January 5, 2016
© REUTERS / SYRIA-TOWN Handout via Social Media Website

But what is clear is that Western media have been caught — once again — falsifying reality about the siege towns in Syria now being liberated.

British state-owned broadcaster BBC tells us that there are up to 400,000 people being held in some 15 besieged towns across Syria. The BBC and other Western media refer to these places as "rebel-held", and by a process of outright lies or half-truths, it is inferred that the locations are being besieged by the Syrian army, supported by Hezbollah militia and Russian air power.

Occasionally, the Western media let slip, like when the New York Times reported this week on "people being shot as they try to escape" the captive towns. The people are being shot — by the so-called rebels holding the residents as hostages, but the NY Times omitted that fact.

World
Facing the Facts: 'US Must Approve Putin's Strategy in Syria'
The half-truth that the Western media don't tell is that many towns in Syria have been, and are still, taken over by foreign-backed mercenary militia. They are terrorists, not "rebels", belonging to such groups as the so-called Islamic State (or Daesh), al Nusra Front and Jaish al-Islam. All of them espouse a twisted, corrupted version of Islam, which ordains that anyone opposed to them can be beheaded or their children gang-raped.

The Western media portray the "Syrian regime" forces as having blockaded the towns and using starvation as a weapon against the residents. Nothing could be further from the truth.

The populations have been held hostage by the terror groups and used as "human shields" to prevent the Syrian army advancing to liberate those being held against their will.

This week, the siege towns being reported in the news are Madaya near the capital Damascus, as well as the northern locations of Kefraya and Foua. But the same siege situations and eventual liberation were repeated previously in many other towns and villages, such as Zabadani, Kessab, Adra, Homs and Maloula.

In all cases, the residents have welcomed the Syrian army with open arms as "liberators" — grateful to have been freed from the nightmare of captivity under the foreign-backed mercenaries. Their conditions of starvation and general brutality were not due to alleged blockade by the Syrian state forces, as the Western media claim, but rather as a direct result of being kidnapped en masse by the mercenaries.

Rescued Syrians Recall Horror of Living in Villages Besieged by Al-Nusra
Irish peace activist, Dr Declan Hayes, told this author how he witnessed the liberation of Maloula near the border with Lebanon back in 2014.

"It was Easter Sunday, April 24, when we entered the town with Syrian army forces. It had been held captive by the mercenaries for several months. We were greeted by cheering, flag-waving children, by young and old, by Christians and Muslims. The atmosphere was euphoric," recounted Hayes.

"You had to see the destruction of Maloula to believe it. Everything had been destroyed by the occupying mercenaries. People were still in a state of shock from the brutality they had been subjected to. Beheadings, shootings, kidnappings, rape. There was graffiti on walls written by the so-called jihadists which said, ‘We get closer to God by cutting the heads off our enemies'."

These are the same mercenaries that Western governments and their media refer to as "rebels". As with the siege of Madaya and other towns being ended this week, the Western media contrived a narrative that Maloula was similarly under siege from the Syrian army.

Of course, the reason why the West refers to "rebels" and not "terrorists" is because the terrorists are supported by Western governments and their regional allies in Saudi Arabia, Qatar and Turkey. Half-truths are invented because the full truth is a shocking revelation of the real, criminal nature of Western governments and how they have sponsored a covert war in Syria for their illicit scheme of regime change against the Assad administration.

Dr Hayes says there is a clinical method in the madness that Syrian towns and communities have been plunged into. The objective is to destroy the rich pluralist fabric of Syrian society and culture.

"Maloula is one of the earliest Christian dwellings in the world. People there speak Aramaic dating back to the time of Jesus," explained Hayes. "But the community there also include Muslims, Sunni, Shia, Alawite, Druze and other faiths. They have been living peacefully together for centuries. Maloula is an epitome of larger Syrian society. It is pluralist, peacefully coexisting."

What the foreign-backed mercenaries have tried to do since the conflict erupted in March 2011 is to destroy the tapestry of Syrian society by brutalizing communities and trying to hack open sectarian schisms.

What's the Trick? Bashar Assad Still Enjoys Public Support in Syria
Hayes believes that the mercenary brigades running amok in Syria for the past five years have been directed by Western military intelligence, the American CIA and British MI6, along with Turk intelligence. "The command and control of these terrorists is outside Syria. The terrorists are following a demonic, but deliberate, plan to destroy the society."

The Western news media are the propaganda arm of the state-sponsored terrorist assault on Syria. A country has been brought to within a breath of being demolished totally, of being turned into failed state like so many other countries where Western powers have illegally interfered "to bring democracy".

Russia's military intervention at the end of September pulled Syria back from the brink. And it is Russia's air power, along with the ground forces of the Syrian army, Hezbollah and Iran, that is now forcing the terrorists to capitulate. Hence the rapid ending of so many sieges.

Spinning with ever-more lies, Western media are now trying to tell their public that the "evil Assad regime" is (inexplicably) having a change of heart and allowing in aid convoys to the stricken, starving populations.

The plain truth is that people in Syria are being held siege by Western-orchestrated terrorists.

A siege of another kind is also being forced on the minds of the Western public by the Western media; it involves starving them of the truth.