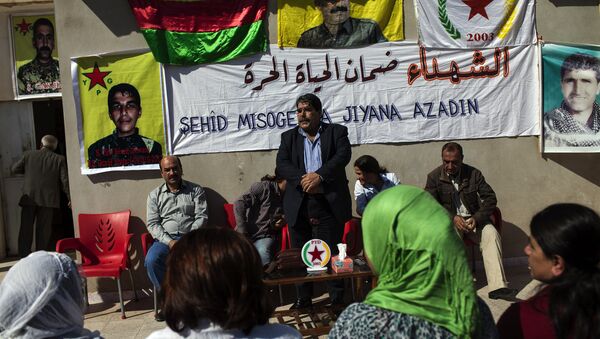 A number of influential Kurdish and Assyrian political parties have reportedly broke away from a Syrian opposition bloc, which labeled them ‘traitors’ and ‘terrorists’ and refused participation in peace talks.

Ranks of the Syrian opposition are getting thinner once again.

Why There Are So Many Women Among Kurds Fighting Daesh
The arguably most influential political party of the Syrian Kurds, PYD (Democratic Union Party) — which formed one of the best anti-Daesh ground forces, YPG — and its Christian Assyrian ally, the Syriac Union Party, along with Kurdistan Democratic Party in Syria (PDK-S) have suspended their membership in a Syrian opposition bloc known as the National Coordination Committee for Democratic Change (NCC), Kurdistan24 news outlet reported on the weekend.

The Kurdish PYD was a founding member of the leftist Committee, which is often regarded as the main non-armed umbrella group for the Syrian internal opposition.

“Many reasons led us to freeze our membership in NCC,” Sihanouk Dibo, a high-ranking representative of PYD told Kurdistan24. “The most important one to us is that many NCC members designated the Syrian Kurdish forces of People’s Protection Units (YPG) as terrorists.”

First and foremost, acceptance of foreign military aid in fighting Daesh caused that the NCC began stigmatizing its only non-Arab members, a statement published by PYD on Thursday, corroborated.

“NCC’s inclusion of the Kurdish forces of YPG, YPJ (Women’s Protection Units) and SDF (Syrian Democratic Forces) in the list of terrorism and demeaning of their victories against IS (Daesh) violates the ethics and noble goals of struggle against terrorism,” the release read.

“Our goal is achieving a democratic Syria for all the Syrians regardless of their ethnicity or sect,” PYD stated.

Russia Against Exclusion of Kurds From Syria Talks - Deputy FM
In December 2015, the Kurds were ostracized from opposition talks held in Saudi Arabia. Riyadh invited 116 representatives from various political and militant groups of Syria to a two-day conference, but some of the participants reportedly had close ties with violent extremist groups. The Kurds and allied groups held their own meeting in the northeastern Syrian province of Hasakah instead.

The Riyadh summit resulted in the formation of a 32-member council, which is set to choose 15 delegates to represent the Syrian opposition at the peace talks with Damascus, due to be held in 2016 in accordance with the Vienna communique of November 14, 2015.

​Russian Foreign Minister Sergei Lavrov stressed that the Vienna-format talks on resolving the Syria crisis should include all of the country’s opposition groups, as well as a delegation from Damascus.

Spokesperson for the Secretary-General of UN recently commented on the exclusion of Kurdish representatives from the talks.

“It is important that as many voices as possible, the wide… the different cultures and minorities and religion groups that exist in Syria be represented at the talks,” Stephane Dujarric highlighted.

As Syrian-Russian Coalition Advances, Cynics Prepare for 'Moscow's Defeat'
SDF, mentioned in a citation above, a secular military anti-jihadist alliance of northern Syria, backed both by Russia and the US, consists mostly of the Kurdish YPG/YPJ units alongside Arab and other minor ethnic militias. The local coalition was formed in northern Syria late last year, but has already carried out several successful operations against Daesh and captured a strategic dam over the Euphrates River and still continues to advance.

​The political branch of SDF declared on Sunday that it is currently working with Moscow and Washington on obtaining representation at the forthcoming peace talks, AFP reported.