Americans Dream of Record Winnings Despite Powerball Plagued by Scandal 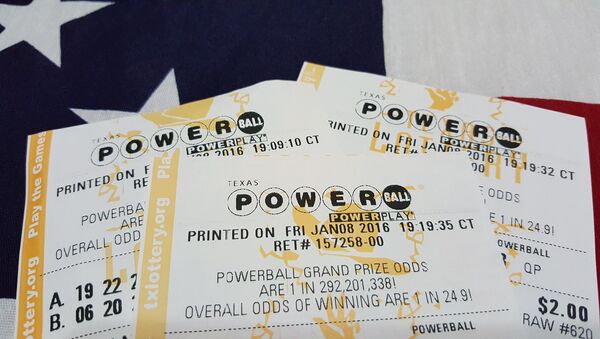 © Flickr / Wil C. Fry
Subscribe
International
India
Africa
As the Powerball lottery jackpot skyrockets to a world-record breaking high, the organization has been quietly trying to handle a scandal that left the executive director on indefinite administrative leave and a security director in prison.

In January of last year, Eddie Tipton, the Multi-State Lottery Association’s information security director, was arrested and fired for helping his brother and his friend win more than $1.3 million in state lotteries. He was subsequently sentenced to 10 years in prison on two counts of fraud.

In December 2010, Tipton had purchased a $16.5 million jackpot winning ticket at a QuikTrip in Des Moines, Iowa, wearing a hoodie to attempt to conceal his identity. For a year, the prize sat unclaimed until a Canadian man came forward as the winner. He then changed his story, and asserted that he represented a winner who wished to remain anonymous, the Washington Post reported.

Later, a lawyer from New York attempted to claim the jackpot on behalf of a Belize-based trust, refusing to provide details about the identity of the winner. The money was ultimately returned to the states in which the tickets were sold.

“It’s financial crimes where you can deter other people from committing similar crimes,” Assistant Iowa Attorney General Rob Sand said during the December sentencing hearing. “This isn’t someone who got drunk in a bar and decided to assault someone. This isn’t someone who committed a single act that they later thought better of…It is calculating decisions made one after another, according to plan, in order to attempt to defraud the Iowa Lottery.”

In October, Charles Strutt, 63, who has been the executive director of Powerball since its conception, was voted out and placed on indefinite leave.

“The truth is, the lotteries voted Chuck out. They’re holding him accountable for the actions of that security guy,” Dawn Nettles, a Texas-based lottery watchdog, told the Associated Press. “But they don’t want anybody to know.”

Christmas Comes Early for Refugee After Spanish Lotto Win
Lottery officials now claim they have developed high-standard protocols to prevent fraud, and Americans seem to have forgotten all about the scandal as they await Wednesday’s drawing.

Additionally, as of October, Powerball launched a pretty serious rule change that made the jackpot significantly harder to win. Now, instead of choosing five numbers out of 59, players have to choose five out of 69. The choices for the Powerball number dropped from 35 to 26, but odds of winning were still decreased from one in 175 million to one in 292.2 million.

“The rules change is intended to increase the odds of winning any prize, while making it more difficult to win the jackpot prize,” the New York State Gaming Commission wrote in a statement.