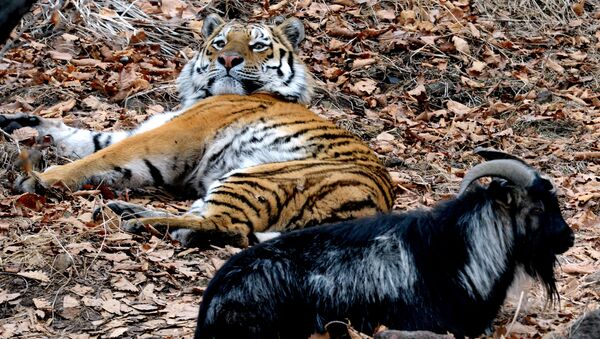 © Sputnik / Vitaliy Ankov
/
Go to the photo bank
Subscribe
Amur the Tiger and his new buddy Timur the Goat may soon make friends with several rare Amur leopards, who are due to be transported to the safari park in Russia's Far East where the tiger and the goat live, according to media reports.

Safari park director Dmitry Mezentsev said that the leopards will be moved to the park from Sweden and the Czech Republic and that they will live in a huge cage which has an area of more than half a hectare (about 1 ¼ acres).

This is what an Amur Leopard looks like. There are fewer than 40 left in the wild. pic.twitter.com/sThvEn6gfQ

According to Mezentsev, a two-year-old male leopard from a Czech zoo will be the first to be transported to the park, while a female leopard's arrival is still being negotiated.

But if the World is not hungry, we'll try to not be eaten. 🐯💓🐐 /Amur and Timur from Russia/ pic.twitter.com/0sbDZGOcTH

Amur and Timur grabbed the headlines on November 26, when it was reported that the tiger had unexpectedly made friends with his prey, a goat, in the Primorsky safari park. Amur can hunt goats and rabbits but this time the predator decided to spare the bold goat.

Unusual Friendship Continues: Tiger and Goat Start Playing Together
The unlikely duo soon became a hit on social media, and now everyone can follow them online.

Additionally, the Primorye safari park administration announced plans to broadcast the daily life of the tiger and the goat live.

000000
Popular comments
Awwwww... Please note: Nobody wants to talk about this story!