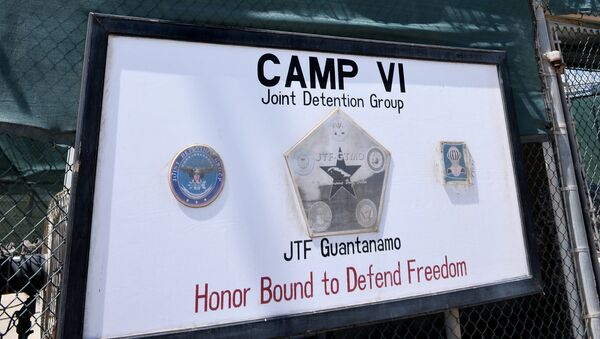 © AFP 2021 / MLADEN ANTONOV
Subscribe
Human Rights Watch urges US President Barack Obama to keep his promise to close the Guantanamo Bay detention center by the end of his presidential term.

US Remains Among Countries Abusing Human Rights by Keeping Guantanamo Open
WASHINGTON (Sputnik) — President Barack Obama must do more to uphold his promise to close the Guantanamo Bay detention center by the end of his presidential term, Human Rights Watch said in a statement on the 14th anniversary of the first detainee’s arrival to the facility.

"[M]uch more needs to be done if Obama is to meet his goal by the end of his term, including speeding up the reviews that can lead to detainee releases," the statement read on Monday.

Human Rights Watch explained the Periodic Review Boards were established by presidential executive order in May 2011 and were supposed to begin reviewing cases within a year, but did not start until November 2013.

"Since then, the boards have issued decisions for 18 detainees, approving transfer of 15. Another 49 detainees await review," the release noted.

US Defense Department Repatriates Guantanamo Prisoner to Saudi Arabia
Earlier on Monday, the Obama Administration announced it had transferred another detainee to Saudi Arabia.

Over the course of his presidency, Obama has repeatedly vowed to close the detention center, which has been known for use of torture and other mistreatment of its prisoners.

Human Rights Watch, however, warned that the Obama administration’s plan to relocate the remaining detainees to the United States, would do nothing to stop the ongoing human rights violations

Last week, the White House said that the president would not rule out taking any available executive actions to close Guantanamo Bay detention center before leaving office in early 2017.