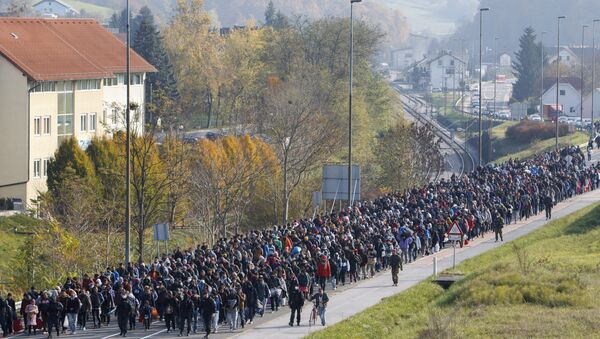 Migrants Sue Greece in European Court Over Human Rights Violations
The German government has predicted that one million more migrants and refugees will try to pass through Turkey to reach Europe in 2016, and just one fifth of those will end up remaining in Turkey, according to German magazine Der Spiegel.

"The Federal Interior Ministry believes it possible that one million refugees will try to pass through Turkey on their way to Europe. Turkey will be able to stop and accommodate 200,000 of them at best," reported Spiegel on Saturday.

"These figures were presented by the Parliamentary State Secretary in the Federal Interior Ministry Ole Schroder at a meeting in Brussels with colleagues from Sweden and Denmark, as well as the EU Commissioner for Migration, Home Affairs and Citizenship Dimitris Avramopoulos."

Schroder also roundly criticized the EU Commission for its handling of the crisis, according to Spiegel.

"The measures aren't working, the numbers haven't fallen, currently 4,000 people are coming daily from Turkey to Greece," the politician, a member of Angela Merkel's Christian Democrats, told the meeting.

Spiegel reported that Commission officials stressed the importance of drastically reducing the number of migrants and refugees entering Europe by the middle of this year. Though the number of people arriving in Greece has according to some reports recently fallen, officials attributed this to bad weather rather than the beginning of a longer-term tendency.

On Wednesday German Interior Minister Thomas de Maiziere announced the country's migration figures for the last year. In 2015, 1.1 million migrants and refugees registered in Germany, the largest influx of people since the country began keeping records of registration in 1950. Of those arrivals, 476,649 have so far made formal applications for asylum in Germany

Around 40 percent of the newcomers, 428,500, were from Syria. Around 11 percent, 150,000 were from Afghanistan. Another 11 percent were from Iraq, and the fourth and fifth largest groups of migrants into Germany were Albanians and Kosovans respectively.

"This is a particular cause for concern," and the authorities have to find the reason for the increased migration from North Africa, said De Maiziere.

On Friday Bavarian Minister of Economic Affairs Ilse Aigner warned about the problems of integrating the vast numbers of migrants who have arrived in Germany. Aigner is a member of the Christian Social Union of Bavaria, which forms the Union faction in the Bundestag with the Christian Democrats.

"I was one of the first to warn about false euphoria, that only well-trained professionals would come to us," Aigner told the Rheinischer Post.

"Meanwhile, we know that 90 percent of the refugees don't bring with them sufficient qualifications to be directly integrated into the German labor market. Integration is only possible through work."

"If we don't see anything happen from the Turkish side in the next few weeks and the number of refugees does not reduce significantly, Europe must put the agreement to the test," said Weber.