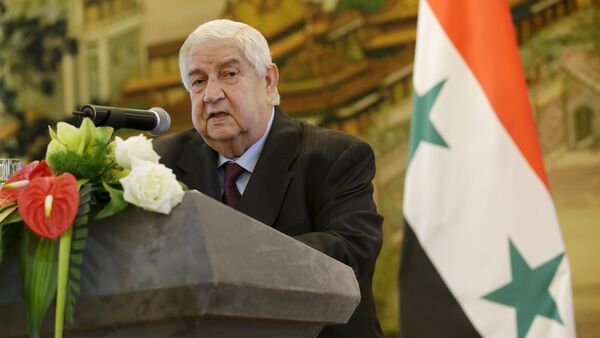 The Syrian government has reportedly indicated its intent to partake in the upcoming Geneva peace talks, but has stated that it wants a list of the opposition groups who will participate.

Is Washington Creating Divisions Among Its Allies in Syrian Conflict?
Speaking to the UN envoy to Syria Staffan de Mistura, Syrian Foreign Minister Walid al-Moualem signaled his country's readiness to take part in the forthcoming Geneva peace talks, but added that Damascus wants to know which opposition figures would attend, media reports said.

"Syria is ready to take part in the Geneva meetings at the proposed time," and is "confirming the necessity of obtaining the list of terrorist organizations and the list of names of the Syrian opposition groups that will take part," Moualem said.

The Geneva talks are aimed at helping to end the five-year Syrian conflict, which has already claimed the lives of about 250,000 people.

High on the agenda is the adoption of a ceasefire plan, which among other things, stipulates defining "terrorist groups" in Syria.

The Syrian government sees all the opposition groups seeking to overthrow the country's President Bashar Assad as terrorists, including those who were represented in a recently-formed opposition council to oversee the Geneva talks.

EU Urges to Halt Attacks on Civilians in Syria Amid Upcoming Geneva Talks
Sources said that the ongoing chill in ties between Saudi Arabia and Iran, which back opposing sides in the conflict, may cloud the talks, which are scheduled to open on January 25.

Meanwhile, the opposition officials have reportedly said that their negotiating team would only be named after the Syrian government announced its list.

Some opposition figures remained downbeat about the talks, which they said are unlikely to open as planned because of a whole array of yet-to-be-resolved issues.