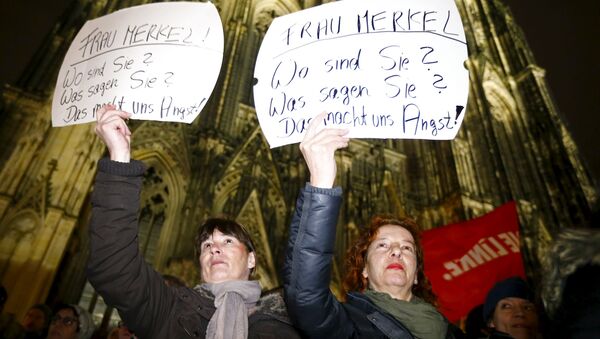 German Chancellor Angela Merkel stated that it might be necessary to take away residence permit of immigrants involved in criminal cases in Germany earlier.

MOSCOW (Sputnik) — German Chancellor Angela Merkel said Saturday she was considering making changes to the country’s legislation to easier deport migrants complicit in criminal activities after the recent mass assaults in the German city of Cologne.

Cologne Sex Attacks: One More Outrage Could Mean the End of Merkel
"We should ask ourselves whether it might be necessary to take away [their residence permit in Germany] earlier, and I have to say that for me, we must take it away sooner," Merkel said during a meeting of Christian Democrats party officials in Mainz, as quoted by the Deutsche Welle.

Under German law, migrants are deported back to their home countries only if the government sentences them to a jail term longer than three years and it is safe for them to return.

The German Interior Ministry announced on Friday that 29 of 32 identified assailants in Cologne attacks were immigrants.