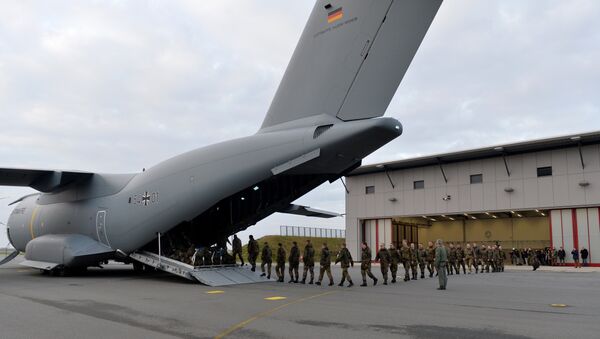 © AFP 2021 / CARMEN JASPERSEN
Subscribe
Berlin is considering the deployment of between 150-200 troops near Libya to assist with the training of the Libyan armed forces, Der Spiegel reports, citing internal German army plans.

"According to internal [government] plans, German soldiers could, along with Italian colleagues, begin to train the Libyan armed forces within the next few months," the German daily reported on Saturday.

For safety reasons, the newspaper noted, the forces would be deployed to neighboring Tunisia.

The mission, aimed at helping to stem the spread of the Daesh (ISIL/ISIS) terror group in Libya, could involve between 150 to 200 Bundeswehr troops, and would be modelled along Berlin's ongoing mission training Kurdish Peshmerga fighters in northern Iraq.

German Tornado Jets Starting Flights Over Syria
The German Defense Ministry has not denied the report, a Defense Ministry spokesman saying only that now is "not the time for speculation about a military deployment, but rather for diplomatic negotiations," according to Deutsche Welle.

The mission, Der Spiegel explains, would be possible only after rival factions in the war-torn country agree to form a unity government.

Descending into chaos in 2011 following a Western-backed military effort to oust Libyan leader Muammar Gaddafi, Libya's internationally recognized government was forced in 2014 to retreat to the eastern city of Tobruk.

The possible deployment comes amid Germany's growing involvement in the Western coalition's war against Daesh. On January 6, Berlin confirmed that it would be deploying an additional 550 troops to missions against Islamist militants in Mali and Iraq. Last month, German lawmakers voted to send a frigate, Tornado reconnaissance aircraft and up to 1,200 troops to the region. German involvement does not include a direct combat role.

000000
Popular comments
At least there's no longer any doubt who the good and bad guys are, just look for the NATO logo.
jas
9 January 2016, 22:44 GMT
000000
Last week their troops were told to stop building shelters for refugees as they were needed for "core duties". Now they're getting a trip to Tunisia while they have riots in their own cities.