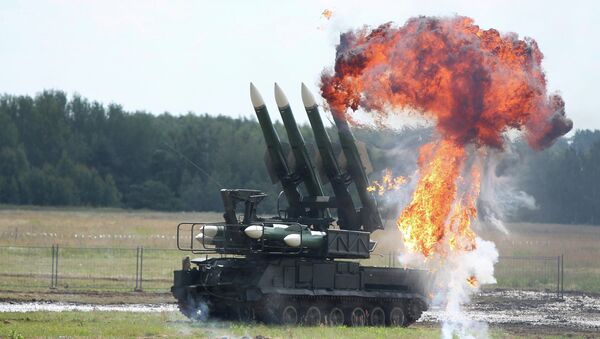 Modernization Time: Russian Northern Fleet to Receive More S-400 Systems
The new type of missile used by the launcher is more compact than the ordnance used by its predecessors, allowing Buk-M3 to carry a payload of six instead of four missiles. At the same time, the new missile outclasses previous models in terms of its technical characteristics: it can destroy any type of airborne target in existence, can be used against naval and ground targets, and is extremely resistant to electronic countermeasures.

Universal Soldiers: Combat Robots to Join Russian Army in 2016
The new radar employed by the Buk-M3 allows it to detect airborne flying at extremely low altitudes (5 meters and higher), and increases the maximum destruction range of the weapon to 70 kilometers. The tele-thermal imaging target designator used by the launcher allows it to detect and track targets regardless of the time of day and weather conditions.