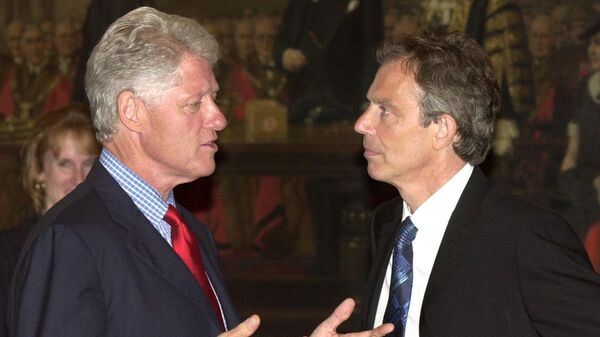 Private phone conversations between former British Prime Minister Tony Blair and US President Bill Clinton have been released in response to a Freedom of Information request, revealing the leaders’ thoughts on the death of Princess Diana, Iraq and fatherhood.

More Emails and More Embarrassment for Hillary Clinton - or Tony Blair?
The heavily redacted transcripts range from between 1997 to 2000 when Blair and Clinton were both in power. The casual chats provide an insight into the "special relationship" between the UK and the US while the leaders refer to one another as "bud" and "mate".

As Cherie Blair was preparing to give birth to their fourth child, Clinton greets the British Prime Minister with "Hello, dad".

And with his tongue firmly in his cheek Clinton goes as far as to offer himself up for babysitting: "You know, after January I’m available for babysitting duties".

To which Blair replies: "Right, Bill, we’ll put you down on the babysitting list now, mate".

On Princess Diana, Blair told Clinton her death was "like a star falling" and revealed his fears for Princes William and Harry.

"She was such a rock of stability in the sense she connected them with the outside world", Blair said.

"I just feel so bad for her," was Clinton’s reply. "She was basically getting a hold of her life."

The two politicians did obviously talk about serious issues, much of which has been redacted from the transcripts.

However, in one conversation Clinton admitted to Blair that he was under pressure to deal with Iraq’s leader, Saddam Hussein, and gave Blair a warning.

"I think if we say to this guy: 'if you start to comply, we will lift sanctions', he will quickly re-establish the weapons of mass destruction program. It may not happen while I’m on office, but it will for you. It could become a real nightmare for you."

The president also cited pressure from congress to "get rid" of Hussein as a factor preventing him from agreeing to lift UNSC sanctions.

Blair to Gaddafi: I Just Called to Say... 'Find a Safe Place'
In turn, Blair emphasized the need to "educate" the British public, as well as international opinion over the danger of Iraq's alleged WMD program.

"We put out a while paper yesterday on Iraq’s WMD programs. We have to educate international opinion so they see the real threat and choices we face."

On less serious matters, during a phone call in 1997, Tony Blair bragged to Bill Clinton:

"I am outside Chequers having tea with a friend of yours, Steven Spielberg".

In another reference to movies, Clinton warns Blair over the phone that "we’re going to increasingly have to deal with terrorists with no ties to any nation state, including Iran, if the precedent there keeps on track".

"But in the case of a lot of Middle East and African countries we could be dealing with these people, like in those old James Bond movies with Spectre and Dr No. We’re going to have a 21st century version of that."