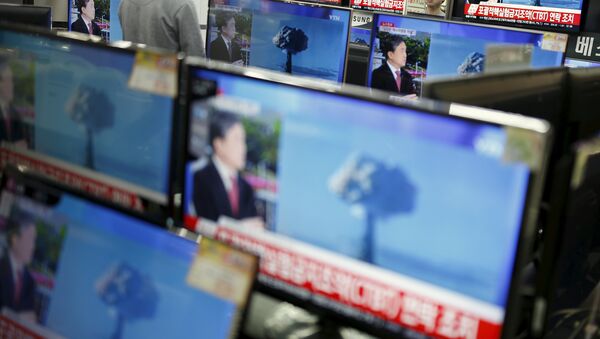 What do we really need to know about Wednesday’s H-bomb test in North Korea?

Quake from North Korea’s 'Nuke Test' Smaller Than Last Time, Experts Say
First off, a hydrogen bomb is way more powerful than an atomic bomb where large atoms, like plutonium, are broken into smaller ones.

A hydrogen bomb uses fusion where small atoms, such as hydrogen, are fused together resulting in a weapon that is hundreds of times more powerful than an atomic bomb.

In order to combine the small atoms and initiate a fusion reaction, such a bomb needs a large amount of energy. And that energy comes from an atomic bomb inside the hydrogen bomb.

Thanks Obama: GOP Candidates Blame President for N. Korea Nuke Test
North Korea has conducted three nuclear tests since it officially acknowledged its nuclear status in 2005. According to Russian estimates the plutonium bombs Pyongyang tested in 2006, 2009 and 2013 did not exceed 40 kilotons of TNT.

In December 2015 North Korean leader Kim Jong-un said his country had built a hydrogen bomb which it would be ready to use to defend the country’s territorial integrity.

Most experts are skeptical about Pyongyang’s claim that Wednesday’s test was of a hydrogen bomb, but it will take a few more days to analyze air samples and study data about the nature of the 5.1-magnitude earthquake detected near North Korea's Punggye Ri nuclear site.

However, even a detailed analysis cannot say for sure whether the device Pyongyang tested on Wednesday was really a hydrogen bomb and not a regular, atomic one.

Wednesday’s blast of what Pyongyang called its “H-bomb of justice” was less powerful than the plutonium-based atomic bomb it detonated in 2013,  raising doubts that North Korea has managed to build a massively more sophisticated and destructive weapon.

“The initial analysis is not consistent with the North Korean claims of a successful hydrogen bomb test,” said White House spokesman Josh Earnest.

In Moscow, nuclear expert Alexander Uvarov said that the relatively small power of Wednesday explosion – less than 6 kilotons – could have been the result of a failed hydrogen test.

He added that North Korea could have actually tested a regular atomic device as part of its ongoing effort to develop a full-fledged hydrogen bomb.

000000
Popular comments
don't be hasty in giving credit to sooo deeply biased news! do not hurry into proping this info version of a failed and insignifiantly test! why are you so sure it was of 6kt? because those who where yelling "Assad must go", "Russia invaded Krimeea", and so on and so forth... are telling us it is so? please! i give that experiment more points than Hiroshima no regret test Mr President.
innocappuccinno
8 January 2016, 00:14 GMT
000000
Newsfeed
0
New firstOld first
loader
LIVE
Заголовок открываемого материала
Access to the chat has been blocked for violating the rules . You will be able to participate again through:∞. If you do not agree with the blocking, please use the feedback form
The discussion is closed. You can participate in the discussion within 24 hours after the publication of the article.
To participate in the discussion
log in or register
loader
Chats
Заголовок открываемого материала
Worldwide
InternationalEnglishEnglishMundoEspañolSpanish
Europe
DeutschlandDeutschGermanFranceFrançaisFrenchΕλλάδαΕλληνικάGreekItaliaItalianoItalianČeská republikaČeštinaCzechPolskaPolskiPolishСрбиjаСрпскиSerbianLatvijaLatviešuLatvianLietuvaLietuviųLithuanianMoldovaMoldoveneascăMoldavianБеларусьБеларускiBelarusian
Transcaucasia
ԱրմենիաՀայերենArmenianАҧсныАҧсышәалаAbkhazХуссар ИрыстонИронауОssetianსაქართველოქართულიGeorgianAzərbaycanАzərbaycancaAzerbaijani
Middle East
Sputnik عربيArabicArabicTürkiyeTürkçeTurkishSputnik ایرانPersianPersianSputnik افغانستانDariDari
Central Asia
ҚазақстанҚазақ тіліKazakhКыргызстанКыргызчаKyrgyzOʻzbekistonЎзбекчаUzbekТоҷикистонТоҷикӣTajik
East & Southeast Asia
Việt NamTiếng ViệtVietnamese日本日本語Japanese俄罗斯卫星通讯社中文（简体）Chinese (simplified)俄罗斯卫星通讯社中文（繁体）Chinese (traditional)
South America
BrasilPortuguêsPortuguese
NewsfeedBreaking
09:31 GMTGeneva to Host New Round of Russian-US Strategic Stability Talks Next Week, American Ambassador Says
09:24 GMTUS House Committee Approves Amendment Recommending Sanctions Against Russian Officials
09:23 GMTSCO to Coordinate Effort to Prevent Threats Coming From Afghanistan, Russian General Staff Says
09:12 GMTAll Crew Members From Crashed Russian An-26 Plane Perished, Remains Found
09:07 GMTBoJo's UNGA Speech: PM Talks Climate Change, Argues Kermit the Frog Was 'Wrong'
09:01 GMTScientists Create Winged Microchip That is Smallest-Ever Human-Made Flying Structure
08:41 GMTBitcoin.org Domain Disabled After Alleged Cybersecurity Breach
08:34 GMTPakistani Military Plane Crashes During Training Flight in Country's Northwest, Reports Suggest
08:33 GMTChinese Foreign Minister Urges G20 to Lift Unilateral Sanctions Against Afghanistan
08:31 GMTRussian Delegation at PACE Session Restricted Due to Sputnik V Non-Recognition, Lawmaker Says
08:28 GMTSwedish Minister: Authorities Failed to Tackle Crime Because They 'Didn't Want to Be Seen as Racist'
08:21 GMTG4 Foreign Ministers Call for Reform of UN Security Council, New Delhi Says
07:55 GMTIndia: Opposition Alleges 'Land Scam' as BJP-Governed State Allocates Land for Hindu Group
07:18 GMTACLU Accused of 'Erasing Women' After it Edited Ruth Bader Ginsburg's Quote on Abortions
06:56 GMTGOP House Members File Impeachment Articles Against Biden Over 'Clear Violations of His Duties'
06:53 GMTUK's Claims About Third Russian Involved in Skripal Case 'Another Lie', Foreign Intel Chief Says
06:42 GMTFormer Islamist Preacher: 'There is a Salafist in Every Swedish Mosque'
06:33 GMTAlgeria Closes Airspace to All Planes From Morocco Over 'Provocations'
06:28 GMTRussia Ready to Cooperate With New German Gov't Based on Mutual Respect, Ambassador Says
05:29 GMTUS Sanctions Suffocating Syrian People, International Community Must Act, Foreign Minister Says