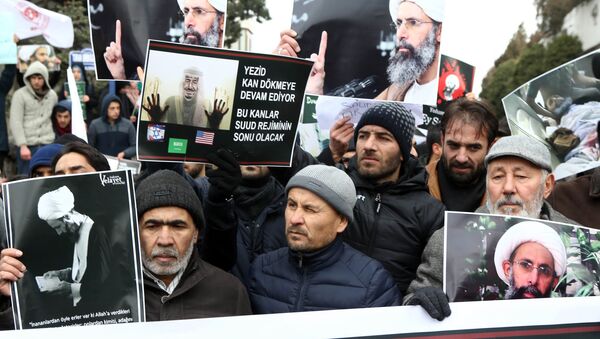 Ali al-Ahmed, director of the Institute for Gulf Affairs, said he warned the US government about mass executions carried out by Saudi Arabia that put the kingdom on the brink of a military conflict with Iran.

"I can tell you [the US government] knew about the executions because I told them," al-Ahmed said in an interview with Radio Sputnik's Loud & Clear.

Al-Ahmed said he spoke to a State Department official face to face, wrote letters, provided evidence and published an article several weeks ago calling on the government to take action to prevent the impending deaths.

"You must make it clear to the Saudis that you are not going to be happy and this will affect" Saudi-US ties, he urged.

Still, the US government did nothing to stop the Saudi government from executing 47 people on January 2, including prominent Iranian Shiite cleric Sheik Nimr al-Nimr.

Al-Ahmed said he warned the Obama administration that "instability and tension in the region would be exacerbated" by the executions.

"It was important for the US, if they wanted stability in Saudi Arabia… they would have gotten on the phone and made sure these executions did not happen," he told Radio Sputnik.

Indeed, on January 3, Iranian protesters enraged over the execution of al-Nimr stormed and set fire to the Saudi Embassy in Tehran. Saudi Arabia responded by cutting off ties with Iran.

Since President Obama took office in 2009, the United States has sold $50 billion worth of weapons to Saudi Arabia. But al-Ahmed said Washington’s most important role in the Middle East is not arms dealer.

"I've always said that the best role the US can play in the region is peacemaker," al-Ahmed said, adding that the Middle East would be better off if Washington sent "peace envoys instead of bombs and planes."

Al-Ahmed was jailed by the Saudi government at 14 years old, making him, at the time, the youngest political prisoner in the kingdom's history.