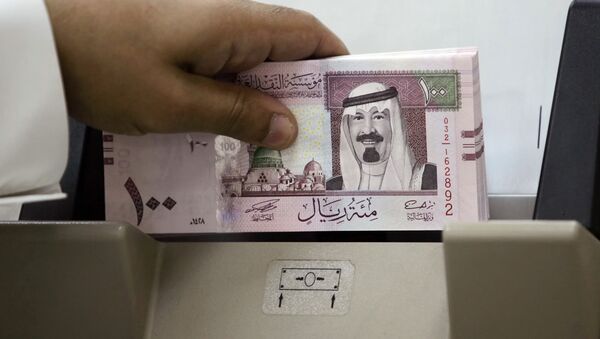 © AFP 2021 / HASSAN AMMAR
Subscribe
Saudi Arabia has been flooding the market with cheap oil to drive competitors out of business, but now it is getting more and more difficult.

"The next casualty in Saudi Arabia's oil price war might be its own economy," the article in WP read.

The reason is that while oil incomes are falling Riyadh is about to make the same mistake that Europe has over and over again, the author underscored. This is cutting its budget without lowering interest rates or softening the economic blow.

"Saudi Arabia has been flooding the market with cheap crude to try to drive its high-cost competitors out of business, but that isn't as easy as it used to be," the journalist wrote.

He explained that the production of shale oil in the US can stay profitable at lower prices than before. What is more important, it can be suspended and resumed as needed for relatively little.

"So even if the Saudis succeed in forcing them into hibernation, they should still be able to wake up in time to keep prices from rising to much more than $50-a-barrel," he wrote.

According to O’Brien, the deficit in the Saudi budget has increased to 15 of GDP, and the country cannot afford to spend money to keep oil prices. This is why the government has to switch to austerity measures, but they may not work either.

"In other words, Riyadh really can't afford to keep spending 13 percent of the country's GDP on energy subsidies, but it also can't afford to hurt the economy any more than low oil prices already have," the article read.

Oil Investors Should Look Ahead in Saudi-Iran Row, Expert Warns
The key problem is that the Saudi riyal is pegged to the dollar which forces the kingdom to raise interest rates when the US Federal Reserve does. The result is that Saudi Arabia’s currency has gone up against almost every other currency at the same time its economy needs it to lower it. When oil prices rise the national currency should be devaluated, the author noted.

Other oil-dependent countries like Azerbaijan and Kazakhstan have already given up their dollar pegs. This is why markets are beginning to bet that Saudi Arabia will be next.

"You can only defy economic gravity for so long," the author concluded.

000000
Popular comments
So you sow, so shall you reap! Digging a hole for another could easily become your own grave. Never deal what you cannot take yourself; an expensive lesson for the Saudis -- there is a certain deservedness to the boomerang.
Elsa JV
5 January 2016, 15:36 GMT
000000
How nice of you guys, to give the Saudi Central Bank advice about interest rates and currency valuations.